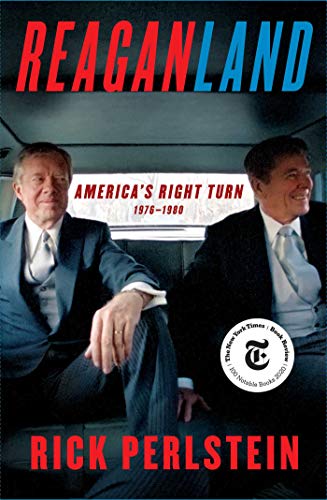 “Reaganland delivers a worthy and captivating conclusion to a rip-roaring, revelatory, and definitive four-volume journey through the dark heart of Movement Conservatism.”

As the United States confronts converging, raging national crises and struggles to reconcile the authoritarian realities of Trumpism with our kinder and gentler self-image, nearly any American author who publishes a work of recent political history in 2020 is in some way tasked with explaining how we got here, and how we became a kind of country that we adamantly assure ourselves we’re not. Reaganland: America’s Right Turn 1976–1980, Rick Perlstein’s enthralling and resonant account of the road to Ronald Reagan’s 1980 election on the strength of his irresistible “Make America Great Again” campaign slogan, wraps up 34 years before Trump’s fateful escalator ride, but may still offer a clue or two as to how we got here from there.

Reaganland delivers a worthy and captivating conclusion to a rip-roaring, revelatory, and definitive four-volume journey through the dark heart of Movement Conservatism. In 2001’s Before the Storm: Barry Goldwater and the Unmaking of the American Consensus, Perlstein introduced the series by advancing two theories that felt, by book’s end, as irrefutable as they were surprising.

First, Goldwater’s landslide loss to Lyndon Johnson in 1964 wasn’t so much a false start for a conservative movement that hit paydirt with Reagan’s election 16 years later, as it was part of a rising tide that neither started with Goldwater’s nomination nor receded with his defeat. Second, Before the Storm asserted that if you believe two left-leaning movements defined the 1960s, you missed the right-tilting one that would help shape every decade since.

Before the Storm and the two mesmerizing works of narrative history that followed it, Nixonland and Invisible Bridge, told a gripping story that found readers racing to turn their pages, even though nearly everyone reading them knew how they’d end. Perlstein reaches that ending in Reaganland, with the election of Ronald Reagan and the ascendance of a conservative hegemony that exerts outsized influence over our economic, political, and cultural lives to this day.

Largely an account of a movement that often hid in plain sight, Perlstein’s quartet chronicles the progression that led to Reagan, with stories on top of stories, always-illuminating digressions into popular culture, and ever-acute political and historical analysis, rendered so vividly that at times you might have thought Perlstein had spent the 1970s hiding under the Resolute desk, scribbling furious notes for years on end.

Though its title most resembles that of the luminous Nixonland, which probably drew the most readers to the series, Reaganland bears a Rocky II-like relationship to its immediate predecessor, Invisible Bridge, as it kicks off mere moments after that book’s conclusion at the 1976 Republican Convention. Indeed, Perlstein initially imagined the two books as a single volume (apparently of Power Broker-like heft).

Reagan loomed fairly large in the first two books in the series, emerging as Goldwater’s devoted and effortlessly charismatic surrogate on the 1964 campaign trail and a controversial California governor surfing the wave of white backlash in Before the Storm, and a cagy Nixon loyalist consistently dismissed as a lightweight by the president himself in Nixonland.

Reagan comes into his own in Invisible Bridge, embodying the post-Vietnam, post-Watergate zeitgeist of a country that nearly embraced a post-exceptionalist examined life and a reckoning with its own hypocrisies and failures before succumbing to waves of gauzy, ahistorical, self-congratulatory nostalgia in its bicentennial year. Reagan, ever at the ready with perfectly calibrated propagandistic bedtime stories, deliberately myopic in their factual selectivity and purged of moral ambiguity, came within a hair’s breadth of snatching the Republican nomination from incumbent Gerald Ford in 1976. What’s more, with his classic “time capsule” speech at the dowdy Ford’s 1976 GOP convention, Reagan left many Republicans wondering the same thing they did when they saw him spiritedly stumping for the prickly Goldwater in 1964: Why didn’t we nominate this guy?

Of course, they did nominate him in 1980, and we’ve lived by Reagan’s rules, contending with the consequences of that nomination ever since.

Invisible Bridge offers the most biographical details on Reagan of any of the four books. As such, it enables Reaganland to home in on the events of 1976–80, with Reagan’s character already fully fleshed out.

The same objections to Reagan applied in 1980 that critics leveled at him in 1976: too old, too conservative, and too confrontational for a Cold War best managed through Kissingerian detente. Reaganland documents not only how he steamrolled those concerns with his relentless efforts to stay relevant as Carter’s most insistent and quotable critic—particularly through his wildly popular radio shows—but also how his legendary charisma failed to prevent frequent missteps, misfires, and failures in a rise to power that our immersion in Reagan myth might lead us to forget.

One of the most misleading of the Reagan myths—and really, there are so many, it’s virtually impossible to pick a favorite—is that he imprinted himself on America’s political and cultural consciousness through sheer force of personality and rhetorical brilliance and the unflinching power of his convictions. Reaganland complicates that story considerably.

Reaganland devotes much of its fast-flipping 1,000-plus pages to chronicling all of the converging strains that comprised the rising New Right, which breathed new life into a GOP left for dead after its defeat in 1976. Those integral elements included increasingly powerful and focused Christian conservatives, a neoconservative movement fueled by converted Cold War liberals like Daniel Patrick Moynihan, and the unexpected drift of mainstream economic thinking toward the anti-Keynesian monetarism of Milton Friedman.

Most of these elements were still flying under the radar in the early days of Carter’s presidency, but Perlstein makes a cogent and colorful case for their increasing influence. “Thus did 1977 begin for the conservatives,” he writes. “Spiritual warriors; ex-Trotskyist bureaucratic guerrillas; Nobel Prize– winning economists and novelists; congressmen and senators armed with state-of-the art computers and a determination to make liberalism obsolete—objectively speaking, a promising emergent coalition. Even if, heading into Jimmy Carter’s first term, most people hardly knew it existed.”

Some of Reaganland’s most compelling episodes concern the culture wars that drove political polarization and animated the Christian right, particularly battles over gay rights and abortion that brought defining figures like Phyllis Schlafly, Anita Bryant, and Harvey Milk to the fore.

Of course, Carter’s failures, what conservative columnist William Safire called his “klutzification” of the presidency, his struggles with inflation and a collapsing economy, his confounding right turn toward mass deregulation, and his refusal to look hard enough for easy answers did much to pave the way for Reagan. But Reaganland is about much more than the making of one president and the unmaking of another; it’s about the ugly unraveling of liberalism and the (so far) permanent tectonic shifts that followed.

What’s more, Reaganland demonstrates how quickly and dramatically those shifts came about, and how the New Right cleverly transformed American economic and political thinking through culture war. “On economics, in fact, public opinion leaned rather left—one of the reasons the New Right preferred recruiting with social issues,” Perlstein writes of the country in 1977. “America wanted to keep the government services they had, and they seemed willing to countenance the taxes they had to pay to keep them—or perhaps even pay more to increase them: seventy percent said the government should be responsible for providing a job for anyone who wanted one, and in a New York Times/CBS poll, a majority favored a government-provided minimum income.”

By 1980, another American majority found itself rapturously embracing a presidential candidate who had sold them on preposterous supply-side economic fantasies, a political platform the Ku Klux Klan proudly declared could have been written by one of their own, and unwavering opposition to the expectations they expressed in that Times/CBS poll. “Government is not the solution to our problem,” Reagan insisted in his inaugural address. “Government is the problem.”

How convincing and enduring did that argument prove? Forty years of rarely interrupted Reaganism later, the federal government’s remorseless abdication of responsibility for mitigating the most catastrophic economic and public health crises in a century almost goes without saying: “It is what it is.”