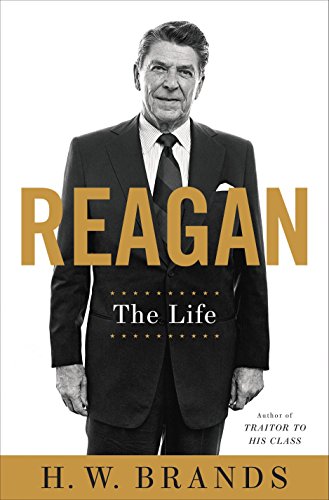 “He’s wonkish and not terribly entertaining. You could say as much about the book.”

It’s hard to turn Ronald Reagan into a subject of moderate interest, but in his new biography of the Gipper, Reagan: The Life, H. W. Brands unfortunately has done just that. Reagan comes across in this book as different from any version of him we’ve seen elsewhere. He’s wonkish and not terribly entertaining. You could say as much about the book.

Ronald Reagan doesn’t have quite as many biographers as Lincoln, but the numbers are definitely getting up there. From his time as governor of California, he has been the subject of dozens of books that seek to explore how a failed movie actor could end up leader of the free world. Even Hollywood wouldn’t greenlight a story like that.

And yet it happened, and Reagan’s life is one of the great stories in American history. Brands dutifully takes us through all the familiar stations of Reagan’s time on earth, from his boyhood with an alcoholic father to his college days and initial radio career, from Hollywood to GE, from exile to the governor’s office and eventually to the White House.

The puzzling thing about the book is that so many of the most important things about Reagan simply aren’t there—and this in a biography that weighs in at close to 800 pages. There’s nothing about how he saved dozens of lives as a lifeguard while still a teenager, or how surprised he was that he had the power, as President of the United States, to order Israel to stop bombing in Lebanon. You could argue that one book cannot contain every detail, but how could a book be this long and leave out some of Reagan’s most formative experiences?

The other thing missing from this book is Reagan’s sense of humor. Once we get into Reagan’s political career, the book focuses on the serious to the exclusion of the lighthearted, which is to completely miss the point of who Ronald Reagan was. Reagan was not a hands-on manager; Brands gets that right.

Instead, he had a clearly thought-out vision of where he wanted to take the country and an Irish sense of humor that he used so effectively to promote that vision. Brands’ Reagan is dry, almost humorless, certainly not much funnier than Jimmy Carter, which is setting a very low bar for presidential comedy.

If you’re going to write a big biography of a political figure, or any figure, whose story is so well known, it’s essential to find new things to say. Brands makes the argument that his book contains information about policy discussions based on interviews with Reagan’s team members. But that’s just inside baseball, truly of interest only to people (like me) who read politico.com every day. And it’s not as though political debate among his team sheds any more light on Reagan.

As Brands himself points out, Reagan’s attitude toward the squabbling members of his administration was not unlike his detached approach to parenting: You guys work it out and leave me out of it.

If you really want to understand Reagan, the thing to do is to pull down from the shelf Lou Cannon’s definitive President Reagan: The Role of a Lifetime, in which he bases his version of Reagan’s life on a multi-decade relationship, having covered him as a reporter first in Sacramento and then in Washington. Lou Cannon knows Ronald Reagan. H. W. Brands knows a lot about Ronald Reagan. That isn’t the same thing.