The Ravenous Brain: How the New Science of Consciousness Explains Our Insatiable Search for Meaning 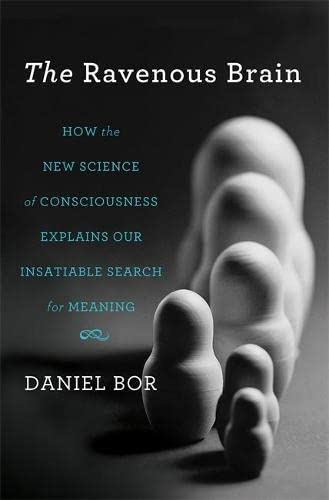 Daniel Bor, an eminent neuroscientist, took on a formidable challenge in writing a book on consciousness for the layperson.

Scientists have grappled with an understanding of the nature of consciousness for a long time, so any new thesis is often greeted with degree of skepticism. Dr. Bor, however, shows skill in explaining the complex subject of consciousness and its current theories in a lively and engaging manner.

He interjects personal vignettes throughout the book. His decision to enter the field of consciousness was a result of observing the changes occurring in his father after a stroke. In the chapter relating consciousness to mental illness, he describes the symptoms of his wife’s bipolar disorder. He treats his own brushes with consciousness—such as absentmindedness—in a lighthearted manner.

Complex theories are illustrated by experiments performed by him or by colleagues, as well as by easily comprehended analogies.

He does not hesitate to reject prior theories or understandings of consciousness—in particular, the view held for centuries that consciousness was in the realm of philosophy, especially the mind-body duality expounded by Rene Descartes.

Dr. Bor uses the processes of evolution to describe how consciousness developed in humans. In order to survive, primitive animals had to develop means of responding to the environment. These responses became instinctive or subconscious without a real sense of consciousness. Dr. Bor describes the anatomy of the brain in relation to that evolutionary development.

Several primitive structures in the brain are necessary for the body to function and transmit nerve signals to the cortex. The brain stem is essential for a person to wake up, while the thalamus acts as a hub, receiving neural inputs and sending outputs to other brain regions. The amygdala is a primitive fear center allowing for instant reaction to threats before any thought processes kick in.

The seat of consciousness really takes place in the regions of the cortex known as the posterior parietal cortex and the lateral prefrontal cortex. Since these two regions carry out similar functional roles in consciousness, Dr. Bor unifies the two with a term calls the prefrontal parietal network.

Although vast amounts of raw data are picked up by the senses, attention filters, selecting a meaningful amount for the brain to process. Attention, therefore, is closely related to consciousness.

Dr. Bor presents an interesting concept: Attention is the result of competition among neurons for sensory input. Those that “win” the competition are able to recruit other neurons, resulting in focused attention, while neurons activated by other sensory input are suppressed.

Contrary to researchers who try to detect particular regions of the brain that become active during conscious thought, Dr. Bor is more of the opinion that consciousness occurs when a particular network of neurons is activated.

It is often difficult to determine if a patient in an apparent vegetative state due to severe brain damage is truly unconscious. Dr. Bor presents a unique solution. A patient is placed in an fMRI machine and presented with various sounds including spoken sentences while a brain scan takes place. If results show certain regions of the brain becoming activated—even when the patient is physically incapable of responding—the patient is showning signs of consciousness.

He begins the chapter on a personal note: His wife has bipolar disorder. During her depressed states there is lack of consciousness, and during agitated states she exhibits an excess of consciousness.

A new theory of autism suggests the patients have an overabundance of awareness instead of a poverty of mental skills, their symptoms due to dealing with this supercharged awareness.

Because of the chaos of their excessive consciousness, autistics seek more ordered activities. The highly focused attention of autistics leads many to become highly talented in specialized areas.

Schizophrenics also have a dysfunctional prefrontal cortex and inadequate working memory; however, contrary to ADHD patients, schizophrenics strive to discover hidden structures within their flawed consciousness stream, leading to delusions and hallucinations.

Treating mental illnesses currently with medications may help alleviate symptoms, but the true problem lies within the brain. “Brain training” exercises designed to improve working memory has shown success in improving AHDH and schizophrenic patients. But Dr. Bor is quick to point out that the popular “games” are ineffective.

Dr. Bor makes a strong case for the value of meditation to help alleviate mental illness or stress, shown to create beneficial changes in the prefrontal parietal network, as well as improvements in attentional tasks and working-memory skills.

In the epilogue, Dr. Bor discusses the significance of the emerging science of consciousness. Although consciousness has provided man with advanced powers to process information, he points out that everyone to varying degrees are both the beneficiaries and the victims of our own consciousness.

Dr. Bor recommends monitoring established chunks of information and how these affect our emotions, decisions, and behavior, suggesting as well adopting a more questioning perspective on deeply ingrained habits, actively seeking more innovative ways of looking at and understanding consciousness.