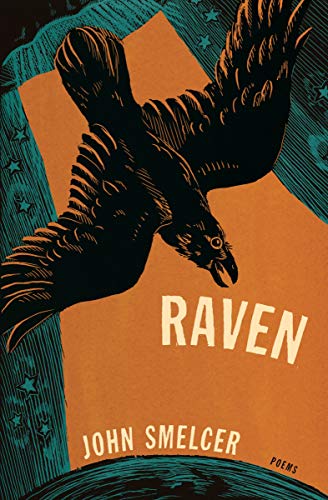 Raven is delightful, both the book of poems by John Smelcer and the character capable of playing any role in this poetic movie of all our lives that Smelcer has written.

Here, Raven (the character, the mythological figure) is a redneck. Raven is a civil rights star. Raven is a man, sometimes, and other times, a woman who’s always “gender-befuddled.” Raven is the Other and also one of us. Raven is whatever we want him to be: ancient history, modern global context, music, silence, and maybe even a great movie streaming on Netflix.

This multiple personality breakdown happens seamlessly, easily, and in a way that rings as true as our favorite memories of what never was, as in these stanzas from the poem “Electric Raven (Dylan Plugs In):”

“He sidles up and hands him

‘You got to get with the times

be a complete unknown,’

Yes, Raven “sidles up” and “jabbers.” There is humor and irony and slapstick and satire in this work of, for the most part, short poems that professes to owe a debt to the bird in poet Ted Hughes’ Crow: From the Life and Songs of the Crow, first published in the early ’70s, and one of Hughes' most important works.

But where Crow could be darkly crass and sometimes a bit too randy, Smelcer’s Raven is funny and sad, as if it could still remember younger times when it (like us) was more idealistic. Take for example, the suggestion of deep evil defying even a mother’s love in these stanzas from Hughes’ “Crow and Mama”:

“When Crow cried his mother's ear
Scorched to a stump.

When he laughed she wept
Blood her breasts her palms her brow all wept blood.”

Compare with stanzas from “Role Model,” one of the darker poems in Raven:

“Overjoyed, Raven watched as one nation

Dropped atomic bombs on another

They are both dark, but in different ways. One is analyzing history and ends by satirizing power hungry nations and even God. The other ruminates on the world’s sickness as represented by the figure of the crow. It’s as if in the same way that the animal kingdom’s crow and raven are biologically different animals, the poetic Crow and Raven were also organically different by virtue of being born of different times and world views.

Raven is also closer in rhythm and composition to the sonnet, the fable, the street tall tale, and this might be the source of its lighter countenance and charm. Take a taste of this in the poem “Raven and the Butterfly”:

“Raven watched a caterpillar crawling on a branch.

It made itself into a cocoon and transformed

into a beautiful butterfly.

Raven was jealous for six months.”

There are other happy surprises in Raven. A poem, co-written with Ted Hughes himself, with ample detail about Smelcer’s relationship with Hughes and son Nick before the death of both, and interesting facts about how the book came to be and to include art by the same artist who rendered illustrations for Crow, Leonard Baskin, and by his protégée, Don Demauro, “thereby completing the unlikely circle of relatedness between Crow and Raven.”

But perhaps the most important, most transcendent, tribute Smelcer offers with this book is not the one he explicitly offers Ted Hughes, but instead the attention paid to Corax Corax’s (Raven’s) role in Alaskan native culture. In the section titled “In the Language Raven Gave Us,” Smelcer claims his place as the only living tribal member who can read and write in his native Ahtna, and includes eight original poems written in his native tongue, along with their English-language translations, thus housing a highly literate example of Ahtna in a place of readier and more recent access for future generations.

The section titled “Corax Corax” follows this up with poems that attempt to plait a connection between the human race and its oft-forgotten, smaller in scope, mythologies. In these stanzas from the poem, “Raven Addresses the Jury After Being Pronounced Guilty as the Architect of All Human Suffering,” that connection takes the form of a perfectly circular, intricately woven tapestry:

Spreading strife is my greatest joy,

for discord is the creator of all great things.

Triumph is born of tribulation.

You’d be nothing without me!”

Cue the evil laugh you heard as you read those verses, and you’ve stumbled on the beauty that is John Smelcer’s Raven.