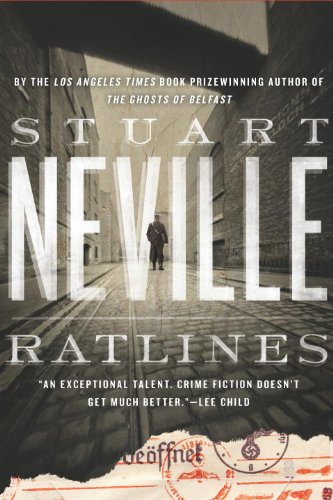 Wherever the proverb the enemy of my enemy is my friend comes from, it’s a useful notion. If a contest were held in the early 20th century to see which country hated the Brits more—Ireland or Germany—it would be hard to pick a side.

If the Nazis had convinced Ireland to take their side, the outcome of WWII would have been quite different. Ireland remained neutral, but there were “hundreds” of Nazis and Axis collaborators using Ireland as a refuge after World War II. The reader learns all this from a young politician named Charles Haughey, who later goes on to becomes Taoiseach or a government minister.

One of these Nazis was “Hitler’s favorite soldier,” Otto Skorzeny, who had supposedly rescued Mussolini in 1943. After the war, Skorzeny was welcomed by Haughey into Dublin society.

There is a photo of the two. The rest, as Stuart Neville notes in his prologue, is “just a story.”

Hoo boy what a story!

In 1963, Albert Ryan is a Lieutenant for the Directorate of Intelligence, the G2 and and Haughey, then a minister wants Ryan to solve three murders of Nazi collaborators before the young Irish American President Kennedy makes his historic visit to the auld sod. A note is found on the first dead German addressed to Skorzeny “We are coming for you!”

After the “Blame the Jews” first line of defense doesn’t get him answers, (as the young lieutenant predicated) Ryan looks further. He’s an interesting character who doesn’t fit in anywhere, a Protestant who wants to get out of his one horse town so badly, he signs up to fight for the Brits. He steals evidence, stupidly falls in lust, and his employer, the Irish government, is dirty.

You have to love the understatements of the Irish. The recent civil war was called “The Troubles,” but until reading this book, I didn’t realize WWII was called "The Emergency.”

Don’t read this book if you like clear lines of good and bad—they are not here. On the other hand, did you really want to root for the Nazis?