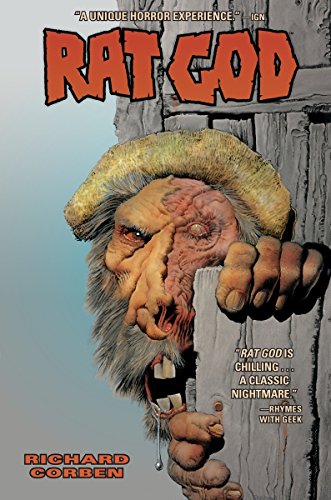 Rat God is the perfect graphic novel for those who enjoy Lovecraftian horror but want something original and exciting.

It is a well-crafted tale that mixes the mythos of H. P. Lovecraft with Native American legends, while also taking a satirical stab at the famous and polarizing author himself. In a time when the World Fantasy Convention has announced that the bust of H. P. Lovecraft’s likeness will no longer be the award given out, Rat God is a perfect read to put things into perspective as to why the man’s writing lives on while at the same time his personal philosophies are being condemned.

The story centers around a young man by the name of Clark Elwood, an academic at the fictional Myskatonic University in the fictional New England town of Arkham. Having met and fallen in love with a woman named Kito, Clark decides he must track her down in her native village after having initially rejected her because of her genetic heritage and after an embarrassing incident on campus.

Just as H. P. Lovecraft was famous for his racial purity beliefs, Clark Elwood holds to his own Aryan “purity” despite some obvious non-Aryan physical characteristics.

This is where writer/artist Richard Corben’s storytelling genius kicks in. He makes it a point to have Clark constantly proclaim his superiority and disdain for the natives of the village of Lame Dog. Yet it is obvious to the reader that there is no way Clark is as pure as he likes to think he is. This by itself would be a great twist on the Lovecraft legend, but Corben also models the look of Clark Elwood after the actual features of Lovecraft himself, bringing the satirical point full circle.

Despite Clark’s obvious loathing of the residents of Lame Dog, he continues on his quest to find Kito and make amends with her. This takes him into dark places, places where a soft man of civilization such as himself has no business going. From a gang of brutes to a cult bent on human sacrifice, Clark is tormented, tortured, and teased at every corner. He fights, flees, and returns—all for the sake of his true love Kito’s heart.

The conclusion of the graphic novel perfectly caps off the story while also making sure that the irony of “Aryan purity” is not lost on the reader. Rat God is a book that flows well, has plenty of suspense and horror, and gives a healthy nod to the source material it is inspired by while also creating a rich, textured world filled with originality and complex characters. It is a highly recommended addition to those who love and collect horror graphic novels.