Raquel: Beyond the Cleavage 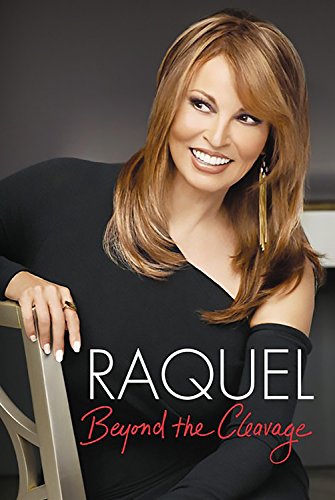 It’s hard to believe that the gorgeous creature on the cover of this book is 69 years old. Although one might initially think this title is an autobiography, it is actually more of a “lessons I’ve learned” or “let me share my wisdom” read.

As a woman behind the larger-than-life sex symbol is uncovered, a more private lady with a few surprising stories to tell emerges. Even though she has been in more than 45 films, TV specials, stage presentations, and commercials, Raquel Welch lives in the spotlight of Hollywood, and most people know her for her curves rather than for her acting prowess or her life beyond the camera. She seems determined to “destroy the myth.”

The promise of seeing beyond the obvious persona of a celebrity is certainly appealing. Early on, Welch reveals a person not quite so exotic as her characters, a woman with feelings and opinions who seems to genuinely want to connect with the “common woman.” She exposes an ordinary childhood, the reality of raising her children alone at a time when divorced single mothers were not often acknowledged, and her struggles to maintain a career. She refused to give her body away to every “Tom, Dick and Harry” and even takes time to explain that “aging is challenging” from many different perspectives. For all those accomplishments, she should be applauded. But she should have stopped there.

Most actors and actresses are not masterful writers and communicators; Raquel certainly is not. In a recent interview, she bragged that she wrote every word in the book herself but a ghostwriter might have been helpful to avoid the too-frequent use of exclamation marks and colloquialisms that detract so from her message. Such text “shouts” (i.e., “NOT!,” “boy!,” and “Ha!”) do not fit with the rest of her words, and such forced flamboyance stands in the way of genuine connection with the reader. Furthermore, it limits the author’s ability to be taken as seriously as she might wish. Add to that the fact that her publisher promises “readers would laugh and cry along with Raquel” and there is bound to be disappointment.

Beyond the first 35 pages, the book moves away from Raquel’s life story (which was mildly interesting), into advice reminiscent of a modern day “Dear Abby.” When it comes to the beauty and health tips, validity must be acknowledged (considering how this actress looks), but in her attempts to council women on personal relationships, she lingers too long on topics such as relationships with younger men, changing sexual mores, or the fact that, for women her age, men may not be all that essential.

Overall, this book has too much fluff. Although Ms. Welch can be admired for her celebrity accomplishments, she should probably should go on with her other artistic endeavors and leave writing to others.