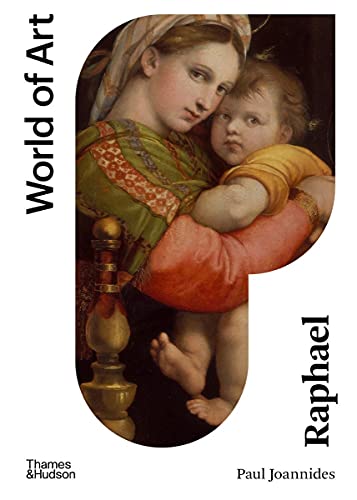 Ah, Raphael. The Raphael. The one and only Raphael who formed part of the famous trinity of High Renaissance polymath artists along with Michelangelo and Leonardo Da Vinci. Raphael (1483–1520), in only 37 years, was a force to be reckoned with and ran a workshop like no other of its time. Raphael, the book, offers a high-level overview of the major categories of projects that were on the master’s agenda from around 1500 to his death.

Facing the most common question of all, art historian Joannides explains how he organized his Raphael material, of which there is far too much to ever have one single volume on the subject. Indeed, Joannides is an expert in the Italian Renaissance and a Raphael specialist who has already written several books on different aspects of Raphael, covering his drawings, his influences, his genius, and more.

This particular Raphael is presented chronologically as far as it makes sense to do so. Many of Raphael’s projects overlapped, so the chronology only goes so far, and the book is based more on categories of project: altarpieces, frescos, tapestries, movables, and architecture. We follow Raphael from his family origins in Urbino, Italy, where we meet his father, also involved in the art scene of the day, and get a quick overview of Raphael’s artistic influences namely within Pietro Perugino’s (1446–1523) workshop where he was introduced to oils as well as fresco painting.

Between 1501–1504 Raphael’s work centered on painting altarpieces. The Umbria chapter elaborates on the differences between Perugino’s style and Raphael’s emerging genius, which is needing to be tempered out of duty to the “master” Perugino. The discussion on The Mond Crucifixion (1502–03) sets the style with which Joannides compares and contrasts Raphael with all of the other collaborators throughout his career. Raphael’s painting is elegant, expressive, complex, and alive, and when other painters are involved with the production process, Joannides can tell.

Art history comes to life with Joannides’ observations. He has a dramatic flare—although it’s not hard to find drama in 1500 Italy. Just imagining Raphael in Florence together with Leonardo, his mentor, and Michelangelo, his rival, gets art history people all in a tizzy. Politics, religion, artistic competition, and stylistic nuances of the prominent geniuses fill the pages as we move into Raphael’s frescos in Rome with his projects in The Vatican, where work was happening in overdrive. Happenings in overdrive seem to be the norm for the pace at which Raphael operated. A pace that, in the end, was not sustainable and is what is generally accepted as his cause of death: exhaustion.

Raphael delivers an insightful glimpse of Raphael’s artistry no matter the medium du jour. Raphael’s storytelling in projects like murals in The Stanza della Segnatura and Loggia of Leo X are unparalleled even by Michelangelo in his Sistine Chapel ceiling. His breadth of ingenuity in lighting, color, tension, movement, drama, and composition explain why he was in such demand and even created designs for other painters to use on their commissions. His growth in just 20 years is nothing short of miraculous and his path of maturity is fascinating to witness. His work done in The Donna Velata in 1518 hardly looks like it was by the same hand as The Madonna of the Meadow in 1506.

Joannides provides a digestible orientation to Raphael and the impact he had on art history. He makes excellent use of over 230 full color images covering their significance and relevance to Raphael’s development. The images are, of necessity, small, and one cannot possibly experience the grandeur of the space in which Raphael worked from the images alone, alas that is the fate of most art history books. Instead, one connects with the grandeur of Raphael himself who is/was, truly, something special.