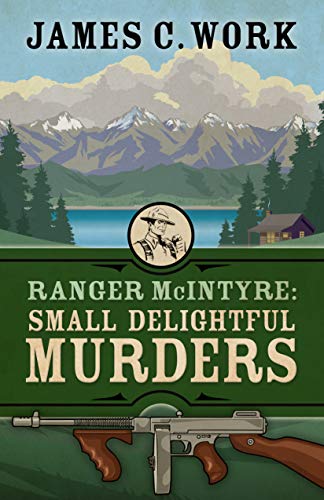 Rocky Mountain National Park Ranger Tim McIntyre thinks best when he’s fly-fishing. The best scenes in this book are when he does exactly that.

The rest is an uneven cozy mystery for folks who favor stories set in grand natural environments. Its genre is dubbed “Frontier Mystery” on the jacket, and “Historical/Western” elsewhere, covering the fact it’s set in the Rockies in 1923, eight years after the national park was created.

From the narrative’s tone, it’s not quite clear if the author is spoofing or being serious. Part of the confusion comes from the Preface, wherein the author describes his background in the region, his motivation for writing the series (this is volume 2), and how he modeled his characters.

This sets up an expectation that the book will be something akin to classic and modern Westerns and wilderness crime adventures. While there’s some sound information about dealing with wilderness complexities and Western culture, it is too often flippant and peopled with caricatures.

This will work for readers who like quirky characters and not-too-technical plots. One group who probably won’t appreciate the book is women sensitive to being viewed as objects.

Every female in the story is either described mainly by her physical characteristics, or presented as some derogatory stereotype; for example, the avaricious-bitch widow, the jolly working girl who always helps the hero in response to some flirtation (whom the hero thanks by saying, “Good girl”), the neurotic wife, the smart fat lady, and the va-va-voom the hero is enamored with and wishes frankly he could have as a pinup during the times he isn’t with her.

To be fair, the author presents unattractive male characters, too. First, the hero himself, who comes across alternately as the kind of undedicated guy you don’t want as a park ranger and the dedicated guy you do. While he fishes on the clock, resents many of his duties, and is a smart aleck in almost all his conversations—including with his boss—he also expresses a passion for what really counts:

“During the war, he saw the French landscape blasted and torn by the battle-mad hand of man. It made him sick to look down from the cockpit of his Nieuport biplane and see charred stumps where a forest had once stood, or bomb and artillery craters filled with sodden muck and mud mingled with the blood of soldiers, mud where no grass grew. . . . The war ended, he exchanged his Air Corps uniform for that of a park service ranger but he did not forget what a ruined land looked like. . . . He was not known to his friends as a very serious man, but when it came to keeping part of the natural world as it is, he accepted the mission with solemn dedication.”

This is the kind of man one would expect from the Preface. The description of his core character and motivation, however, doesn’t come until almost 200 pages in.

Meanwhile, we are treated to an assortment of cliché fat and happy chefs, angry drunks, stupid handymen, corrupt law enforcers, and tough-talking gangsters. Plus a whopping sexist generalization: “I don’t know any man who can resist picking up lengths of wire.”

If you can see all these characters as part of a fun and exaggerated troupe in a fun and mostly plausible adventure, this short novel will be a delightful leisure read. If you can’t see it that way (refer to Preface), then the book is just . . . annoying . . . most of the time.

But mysteries are ultimately about plot, and in this area the author delivers. A creative assortment of dangerous pranks occurs to compel two resort owners in the park to sell their properties to the gangsters. This is the Prohibition era, and the bad guys want to set up a front for their illegal activities out where nobody official will see them.

As the resort owners hold out for better offers, the pranks and near misses against them escalate, until finally bullets start flying. McIntyre pursues the case on command from his boss and ultimately figures it out. Not, however, without substantial help from the fat woman and the va-va-voom FBI agent who are smarter than he is.

The other part of the book’s unevenness comes from great mini descriptions. Ranger McIntyre customarily thinks of crime-solving as completing a jigsaw puzzle; here, he notes that romance, too, is like a jigsaw puzzle, “only one where several pieces had gotten lost under the rug. Or where the pieces of two different puzzles had been mixed up together and there was no box with a picture to show what it was supposed to look like when it was finished.”

Anyone who’s had a relationship can relate to that!

Likewise: “McIntyre went about his duties like a donkey on a treadmill, his body reporting to work while his mind went on vacation. He would be ticketing a car for illegal parking or issuing a warning for a hazardous campfire and would find his brain wandering off in the direction of Blue Spruce Lake. Trying to keep his mind on the job was like trying to teach a three-year-old to tie shoelaces while playing with a kitten.”

There you have it: a mixed bag. Some great stuff, some medium stuff, some weak stuff, working together to create either an enjoyable light read as part of an equivalent series, or a tiresome read to fall into the one-off bin.

Either way, the Rocky Mountain National Park is a great place to set the story.