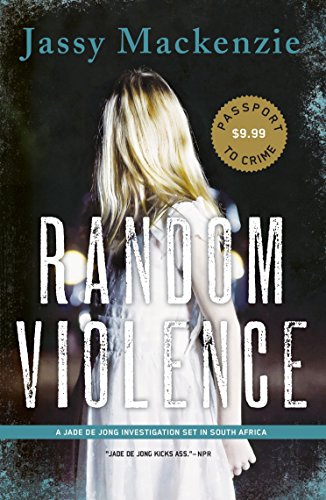 A young woman, Annette Botha, arriving home one night, gets out of her car to unlock a malfunctioning automatic gate outside her home. Within seconds of leaving the car, she is confronted by what appears to be hidden intruders. Less than a minute later, she is shot dead by one of the intruders. Not one word was spoken by any of the assailants. Random Violence begins with what appears to be a simple act of random violence. But is everything what it seems? Or is there sometime more sinister afoot?

In Johannesburg, prosperous whites live in gated communities; when they exit their cars to open the gates, car-jackings are common. But seldom is the victim killed, much less shot twice, like Annette Botha. Soon afterward, Piet Botha, the husband of the wealthy woman, is the primary suspect in his wife’s murder. But is he the real killer? Or is he being made the fall guy for someone else’s dirty deeds?

P.I. Jade de Jong fled South Africa ten years ago after her father, a highly respected police commissioner, was killed. She’s returning home to Johannesburg with one thing on her mind: to take her revenge on the convicted murderer of her father. The jailed killer is about to be released from prison, but if Jade has her way, he’ll wish he had stayed incarcerated.

Now back in town, Jade offers to help her father’s former assistant, Superintendent David Patel, with his investigation of the killing of Annette Botha. Under apartheid, Patel, of Indian descent, could never have attained his present position. But he is feeling pressure from his “old school” boss with respect to this investigation and fears lingering prejudice is at work.

David and Jade later learn that robbers killed Botha’s brother a few years earlier, and that the dead woman had recently retained a detective, who has since disappeared. As Jade probes into this and other recent car-jacking cases, a pattern begins to emerge, a pattern that goes back to her father’s murder and that involves a vast and intricate series of crimes for profit. It may also give her some uncomfortable truths; truths she may not be willing to accept.

Beautiful and haunting, Random Violence is a remarkable début by Ms Mackenzie.

Each chapter is filled with wonders and horrors masterfully told in darkly poetic prose, with absolutely no wastage of space permitted. She has created a terrific and believable P.I. in the headstrong and somewhat intimidating Jade de Jong; a P.I. we will no doubt be seeing plenty of in the future. A host of colorful and memorable characters fill the pages, alongside Jade, making this a gripping and page-turning read, despite the bleakness of place and events via post-apartheid South Africa.