Rainbow Warrior: My Life in Color 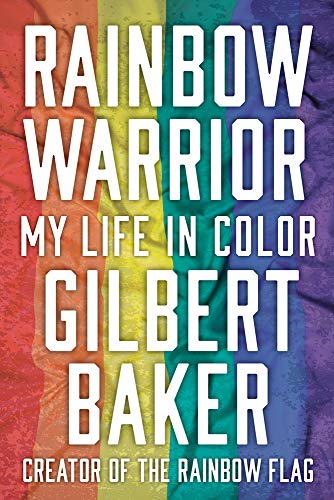 “Rainbow Warrior is an engaging read. It is funny, poignant, painful, and triumphant. It is never less than entertaining.”

Gilbert Baker lived a life that was, at once, very public, and very much behind the scenes. As a gay activist living in San Francisco since the early 1970s, he met and worked with other prominent activists such as Harvey Milk and Cleve Jones, sharing with the latter a tumultuous working relationship that lasted for decades. But Gilbert Baker was not the kind of person to make an incendiary speech in front of a large crowd, or even appear in front of one, unless in the persona of Pink Jesus or one of the Sisters of Perpetual Indulgence.

Instead, he was the creator of one of the most enduring and widely recognized icons of gay liberation: the rainbow flag.

In this posthumously published autobiography, Gilbert Baker tells the story of how he, like Dorothy, made the transition from a sepia-toned life in Kansas to a sparkling city full of beautiful, colorful people. There is, however, a key difference: Dorothy’s odyssey ends with a return to Kansas, where she realizes her heart’s desire was always in her own back yard; once Baker gets to San Francisco, he never looks at Kansas again, except in a rear-view mirror.

Baker gives obligatory attention to his tortured childhood as an obviously gay boy in Kansas, and his equally tortured time in the military, but he deftly sketches out both periods in quick, light, strokes. By page 25, he is an adult, honorably discharged, and living in a queer Mecca he could never have imagined when growing up in Wichita. With more than 200 pages to go, he is ready to tell the story of how he became the gay Betsy Ross.

Though he tells many stories of his 45 years’ work as an activist (not all of his endeavors being successful), two episodes deservedly receive the greatest attention: the creation of the first Gay Pride rainbow flag in 1978, and the creation of the mile-long rainbow flag for the 1994 Gay Pride celebration in New York, honoring the 25th anniversary of the Stonewall Riots. This flag, which was then the longest flag ever created (though Baker himself would break the record before his death) was one which Baker and other gay activists were determined would be carried past St. Patrick’s Cathedral on Fifth Avenue, even as the archbishop and then-mayor Rudolph Giuliani were determined that it wouldn’t.

Gilbert Baker, though a creative man, was not a big thinker. Very little of his book is consumed with broad theories or calls for social transformation. Instead, Baker’s prose is very much like his work on his industrial sewing machine: carefully crafted and focused on the task at hand. Rainbow Warrior is an engaging read. It is funny, poignant, painful, and triumphant. It is never less than entertaining.