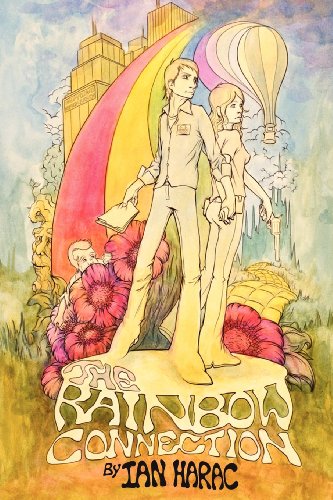 Blackwyrm Publications, February 2009 Can a world created in a work of fiction actually exist? That’s the premise of Ian Harac’s The Rainbow Connection. The storybook realm of Oz is breached through portals called bridges. Think Star Trek and “Beam me up, Scotty.” The problem begins when the tech-savvy residents of Prime start to take advantage of the more vulnerable Munchkins of Oz.

Matt Anders is an inter-world copyright agent trying to keep sci-fi nerds in Prime from peddling pirated goods of movies and TV shows with a cult following. During the investigation of a case, a Munchkin stowaway ends up dead. Matt is determined to find out how this citizen of Oz was able to cross over into the real world.

Computer geek Bobbi Sinderman provides Matt with a way into Oz. By opening up an illegal bridge portal, the two arrive in a land of talking squirrels and tourist-hating trees. They uncover a Munchkin prison run by Nazi-like flying monkeys. Behind the operation is a group of corrupt higher-ups from Prime harvesting the Munchkins’ labor for illicit drug trafficking. The source of the narcotics is the cash crop of Oz—poppies.

Matt and Bobbi are determined to expose the crimes of these rogue agents. But first, they have to find a way back to Prime. In a land devoid of sophisticated technology, they make use of a hot air balloon, a truck with manual transmission, and a rudimentary computer composed of lights and vacuum tubes. In order to put an end to the exploitation of others, they must learn to depend on each other.

Sarcasm is at the heart of the dialogue. Matt and Bobbi spar in verbal combat. Each wants to have the last word. While the imagery created in Harac’s metaphors is vivid. For example, “. . . the sun battered them with the enthusiasm of a cop who was sure no one had a video camera in the vicinity.” His writing is matched only by his imagination. His alternate version of modern day Kansas is utterly complete in its description. It is a drab, isolated place that has turned in on itself. Clothing is prude. Curfews are enforced. Menus have one page. Technology is a subversive ideal. The setting is the antithesis of a sci-fi fantasy.

Harac’s vision is so complete that it takes the reader awhile to catch up to the lingo and practices that the author takes for granted. It is not until Matt and Bobbi are transported to Oz that the book begins to take off and the action is easier to decipher. Bringing to life such a complex world is quite an achievement. Harac just needs to give the reader a clearer picture of what he is seeing in his head in the opening pages.

Overall, this is a sci-fi conspiracy of Munchkin proportions. Just don’t look for Dorothy in this version of Oz.