Rage Becomes Her: The Power of Women's Anger 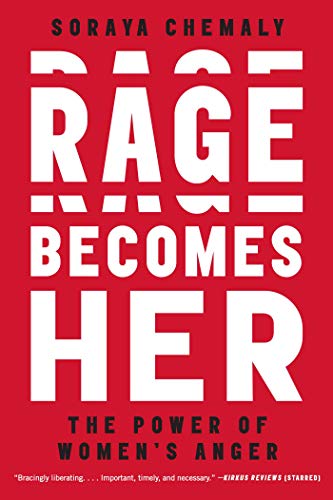 “There will be people who reject Chemaly’s book as being the rantings of another angry woman. By doing so, they will prove her point.”

“Senator Warren . . . had appeared to violate the rule. She was warned. She was given an explanation. Nevertheless, she persisted.”

When Senate Majority Leader, Mitch McConnell uttered those words he had no clue how his words would become a rallying cry for women throughout the country.

For, well, ever, women have been told to sit down, shut up, and be “ladylike.” Throughout history, men have had been a major force in demeaning women and limiting their participation in everything. McConnell opened the flood gates to years of women’s pent up angst and anger with his condescending attitude of “how dare that woman defy me.”

Well, Mitch, if you think Senator Warren persisted, meet Soraya Chemaly and her latest book, Rage Becomes Her. In fact, someone needs to send him a copy; he probably won’t read it, but one never knows.

Women reading this book will recognize the scenarios Chemaly recounts and, very likely, will find their anger growing over the slights they experienced in their lives. If the reader is not angry when she starts reading the book, there will be a slow burn when she finishes. And, this is not to say that men are not a target audience. Men should read the book and the women in their lives must insist that they do so.

In 400+ pages, Chemaly takes the reader on a ride through history showing how women have been taught to hide their emotions, especially anger, from public display. In self-defense classes, the most difficult aspect of the work involves screaming. Women are taught, from day one, to always use an “inside voice.” Women are admonished at regular intervals to not raise their voice or express their anger. Even when being attacked physically, women find it difficult to raise their voices in their own defense.

The best aspect of book is Chemaly’s ability to open the door on what so many women instinctively know but never addressed. Chemaly does not trivialize women’s emotions. Rather, she advocates for women to release their emotions. Not doing so is detrimental to the health and well-being of women.

Chemaly writes, “Women are three times more likely to develop a disabling and painful autoimmune illnesses, those in which the body . . . attacks itself by producing self-damaging anti-bodies, than men are.” Think about that and what it means.

Women are continually attacked on myriad grounds, and Chemaly covers them all. The author points out the presumption that men have of always thinking they know what is best for women. Men assume that women are incompetent and unable to make rational, reasoned decisions. Women are given a pat on the head and told not to “worry your pretty little head about it.” As if!

Whether it involves rape, sexual assault, verbal or physical assault, women are blamed and then told to keep quiet about it. When something happens, the discussion usually revolves around how the men in the woman’s life are affected. Her feelings, emotions, reactions are discounted as irrelevant. Chemaly quotes the poet, Elisabeth Hewer, “God should have made girls lethal/when he made monsters of men.”

Lately, the #MeToo movement, tales of sexual assault and sexist behavior by men have permeated the news. Hillary Clinton is told to go home and be quiet after the 2016 presidential campaign, but Mitt Romney is encouraged to reenter politics after his dismal performance in 2012. The playing field is not now and has not been level. Chemaly’s book traces the history of the ways in which women have been and continue to be discounted.

There will be people who reject Chemaly’s book as being the rantings of another angry woman. By doing so, they will prove her point.

The opening sequence in the book is a story of Chemaly’s mother throwing her wedding dishes over the balcony to smash on the deck below. Chemaly’s reaction to her mother, pretending she did not see anything, is as enlightening as envisioning the scene. Women often look the other way when another woman engages in what may be considered “inappropriate” behavior.

Rage is the latest to deal with women and their place in society, their upbringing, the rules and constraints imposed upon them. In short, it is part of the ongoing saga of women navigating the world while struggling with age-old rules that women had no role in writing.

This, however, is not the first time Chemaly has addressed these issues. In 2014, she wrote, 10 Words Every Girl Should Learn. In that article, Chemaly writes, “As adults, women’s speech is granted less authority and credibility . . . That’s why, as researchers summed up, ‘Having a seat at the table is not the same as having a voice.’”

Chemaly’s book is giving voice to how women’s voices have been suppressed. How women, who conform to restrictive societal standards refrain from expressing the words, emotions, thoughts, ideas that make them human. For that reason, if no other, this book needs to be read.

Women will find themselves (if only silently) nodding in agreement as they pass through the book’s chapters: “Mad Girls,” “Angry Bodies,” and “The Politics of Denial.” Women will recognize themselves in “Smile, Baby” because every woman has been told to “smile” by complete strangers. Then there are the times when a woman is expressing an opinion only to be asked, “Why are you always so angry?”

This is also an important book for men to read. The condescending, patronizing, and insulting manner in which most men treat women is inexcusable. Women are not property. Men who feel threatened by strong women need to take a look at themselves and ponder why.

And the men? Hopefully, they will think twice before insisting that a woman “smile,” or assume that “every woman” enjoys being hugged, touched and kissed without permission.

And for those who persist in ignoring the warning? Women are engaging with their rage, and everyone is on notice.