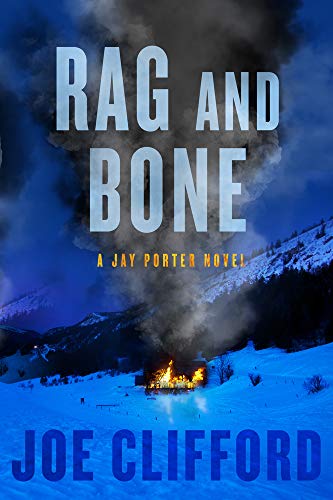 “For gritty realism and punchy narrative, nobody beats Joe Clifford.”

The phrase "rag and bone" refers to the term "rag and bone man" defined as someone who collects unwanted items, and after refurbishing and/or repairing them as needed, sells them. Historically, this was a task performed on foot with a shoulder sack or on a horse drawn wagon. Items collected included rags, bones, and various materials, anything discarded by its original owner. There wasn't much financial gain in this profession, and rag and bone men typically lived in extreme poverty.

Jay Porter, the protagonist in this character driven book, is a modern rag and bone man, meaning he makes a living frequenting estate sales, rummaging through junkyards, cleaning out abandoned homes or the homes of people who have died, and then selling unwanted belongings and castoffs in his shop, Everything Under the Sun.

At least, that's what he did before he ran off.

The story opens when Jay, having disappeared after being framed for a murder he didn't commit, returns to his home town of Ashton, New Hampshire, when the real murderer is found. His reappearance is a shock to everyone since no one has heard from or about him since the police issued a multistate all-points bulletin.

The opening pages consist of a conversation between Jay and the town sheriff about why Jay left in the first place, and a rehash of people and events that happened in the past, like maybe in a previous book, or over the course of several books. It's a confusing few pages, and readers might do themselves a favor by checking out the author's previous Jay Porter novels to orient themselves to the storyline.

This is a dilemma faced by many authors who write series. Knowing that some readers will pick up subsequent books without reading the early ones, they have to decide how much to summarize in each new book in order bring the new reader up to speed without being vague or repetitious.

Sheriff Turley is righteously flabbergasted when Jay shows up again:

"'Ten months, Jay. Ten months. Vanished. Gone. Without a trace. No contact with anyone. Including your own son.' He knew that would hurt. And it did. Not talking to Aiden for almost a year was the hardest thing I'd ever done. He held up both hands, showcasing all ten of his porky links, mouthing the word 'ten' to hammer the point home."

Characters in fiction don't always have to be likeable, and Jay Porter is a hard guy to like. He's broken, beaten down, depressed, irritable, ornery, frazzled, insecure, a recovering alcoholic whose anxiety is eased by six-packs of beer, has a problem with anger management, and is easily goaded into bar fights. His wife Jenny has already divorced him, he's estranged from his son, his best friend is nothing more than a name in an Internet chat room, and he's homeless. He has disappointed nearly everyone in his life, and truth be told, he has a tendency to be whiny and self-pitying. What's to like?

". . . I checked my burner phone for messages. Nothing. Not sure what I was hoping for but I still managed to be disappointed. I didn't want to talk to anyone, didn't expect any fanfare over my return . . . Yet my feelings were hurt no one welcomed me home. If I hadn't been wanted for murder, would anyone have noticed I was gone?"

It's a dichotomy in the literary world that readers don't have to like the character to enjoy the book. Some don't even have to like the plot as long as they like the writing. The plot in this book, centering as it does on events that happened before—child abuse, pedophilia, a suspicious fire, questionable business practices, a rehab center built on toxic soil—is vague and in need of a jolt. What saves this book is the setting, juiced up with some interesting characters, and the writing. Especially the writing, which is excellent.

After the somewhat perplexing opening, the author gets down to business by telling the reader that Jay survived on the street and under the radar for so long by taking day laborer jobs:

"Town to town, shacking up at assorted transient motels, I kept a low profile—and my mouth shut. The work was grueling, back-breaking, laying pipe or cable, sent down into sewers to fish out the crap clogging the line. They worked you till you dropped.

"Most of the men were addicted to something, evidenced by their blood-sapped faces if not palsied hands . . . you'd be lucky to clear forty-six bucks. Which spelled a pack of smokes, six-pack of beer, and another night at a crummy motel with bedbugs feasting on your flesh."

He's managed to hold on to his junker pick-up, and is lucky enough to get his old apartment back when he returns, but putting his life back together is far from easy:

". . . "Since so many of my utilities had been shut off due to delinquent payment, I not only had to repay what I owed—which was considerable—I also had to double down on deposits, my credit ground into dirt. Meager savings depleted, I had no relatives to turn to for financial help. I had an aunt and uncle I hadn't spoken to in ages. Couldn't imagine they were too happy with me."

Author Joe Clifford knows what he's talking about when it comes to substance abuse. He'd been a homeless heroin and methamphetamine addict for ten years before straightening out his own life. He's published an autobiographical book called Junkie Love. Married now and the father of two sons, he has penned this fifth novel in his award-winning Jay Porter series.

For gritty realism and punchy narrative, nobody beats Joe Clifford.