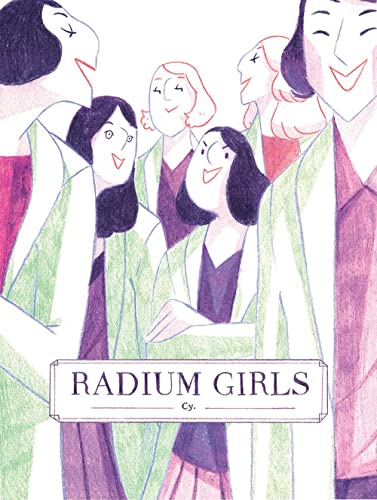 Graphic novels are hot now and for good reason. They can be a wonderful format for making difficult stories more accessible and powerful. But not all graphic novels are effective in using this flexible format in the best ways possible. Sadly, Radium Girls proves to be both a poorly written story and a weak visual one. The most that one can say is that it’s a quick read for anyone who wants to learn this sad history from the early 20th century. Not much investment in the reader’s time is demanded and the payoff is equally slim.

The book opens with introducing the “radium girls,” the young women who apply glowing paint to watch dials. There is no sense of individual characters. True, three of the women are sisters, but all of them look like they could be related with similar noses, builds, hairstyles. There’s not much delineation of distinctive personalities, aside from the shy, hesitant new girl. Part of the problem is that the story isn’t told from any particular point of view. The reader jumps from one person to another, from one scene to another, without a strong sense of character development or of narrative.

After showing us how much fun the girls have together, one complains of a toothache. The next page she’s already dead:

“The doctors are sure, syphilis.”

There is no sense of building drama, of fear, though one young woman after another dies. The story then moves quickly to lawyers, a court fight, but once again, everything is settled very quickly. Who is the lawyer? Why does he take their case? How do they pay him? All we know is what he says:

“You’re at an incredible disadvantage. There are only 9 official workplace illnesses, and radium is not one of them. And the statute of limitations in New Jersey has expired. If the illness has not been declared within five months of your departure, you can no longer make a claim.”

The book ends with no real sense of resolution although a helpful author’s note afterward gives some outline of workers’ rights.

The larger historical context is well suggested by visuals of ads for radium cream. If this was considered safe enough to put on your face, it was obviously okay in a workplace. But there is no mention in the back matter about the larger effects of radium poisoning on people who weren’t workers—those using the cream, for example. A brief reference to Prohibition and women getting the right to vote serve as markers for the period, but their quick introduction feels like s distraction rather than a fleshing out of the period.

For a better sense of the visceral dangers of radiation, read David Small’s brilliant graphic novel, Stitches, about the throat cancer he got because his father constantly irradiated his young son as a “cure” for any cold. In fact, that graphic novel is an example of everything Radium Girls fails to be but could have been. Brilliant, thoughtful character development, bringing the reader into the situation rather than quickly skating over the surface, and doing the careful research necessary to bring a particular time and place alive.

Or if you want to know more about the radium girls, read the book cited at the end of the Cy’s graphic novel: Kate Moore’s The Radium Girls. True, it’s not a fun graphic novel, but it’s a much fuller treatment of this story. There may be no art, but Moore’s writing is fresh and effective, much more vivid than the pallid art and jumpy writing of this graphic novel. Still, for the impatient or reluctant reader, this short graphic novel is easily digested. Those wanting more have other places to turn to for more powerful storytelling.