The Radio Right: How a Band of Broadcasters Took on the Federal Government and Built the Modern Conservative Movement 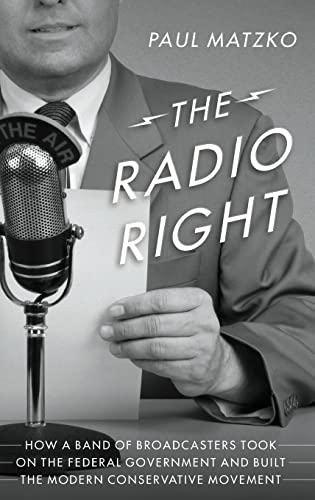 “Historian Paul Matzko’s well-researched and often terrifically entertaining new book, The Radio Right, provides a compelling, convincing, and closely observed ‘I Fought the Law’ origin story for a religious-right media movement that lost the political battle of its first wave but ultimately won the ideological war.”

Some of the most riveting and revealing narrative history of the last dozen years has examined the arc of modern conservatism and the rise of the religious right in the United States.

Among other things, Rick Perlstein’s trilogy (soon to become a quartet with the imminent publication of Reaganland) attempts to answer such puzzling questions as how a conservative movement that appeared dead in the water following Lyndon Johnson’s landslide victory over Barry Goldwater in 1964 came roaring back with the Hard Hat Riot of 1970 and the Reagan landslide of 1980—overwhelming not only the seemingly robust “Liberal Consensus” of the Kennedy/Johnson era and the New Deal Coalition that had held together (however fractiously) since the Roosevelt era, but also significant reluctance within the GOP to risk a repeat of 1964 by veering too far right of center at the national level.

Kevin M. Kruse’s One Nation Under God looks at the corporate roots of the fusion of evangelical Christianity and far-right politics that has made the two virtually inseparable, terrifyingly powerful, cynically unmoored, and immensely profitable.

Historian Paul Matzko’s well-researched and often terrifically entertaining new book, The Radio Right, provides a compelling, convincing, and closely observed “I Fought the Law” origin story for a religious-right media movement that lost the political battle of its first wave but ultimately won the ideological war.

The Radio Right: How a Band of Broadcasters Took on the Federal Government and Built the Modern Conservative Movement focuses largely on the staggered impact of a rather ignominious chapter in the annals of the Kennedy administration—one that multiple conservative media outlets shrewdly dredged up during the 2013 controversy over alleged “enemy hunting” by the Obama-era IRS. The overblown 2013 incident eventually revealed more about plodding and bumbling IRS bureaucracy than actual partisan targeting of conservative groups.

But the battle referenced in the 2013 brouhaha and highlighted in The Radio Right—the infamous 1961 “Reuther Memorandum” and its five-point plan for marshaling the power of the IRS, the FCC, and the FBI to choke off right-wing radio before it interfered with Kennedy’s upcoming 1964 re-election bid—doesn’t reflect terribly well on the Kennedys (or the Reuthers) several decades later.

Matzko contends that the Kennedys, by carrying out some of the memorandum’s recommendations in a down-punching effort to preserve a postwar liberal consensus whose fragility they recognized at a time when few others did, attacked illiberal ideas with decidedly illiberal means.

While other studies of the roots of the modern conservative movement look to William F. Buckley’s God and Man at Yale and the spirited youth movement that launched The National Review, Matzko contends that Buckley’s efforts, however influential on the intellectual evolution of modern conservative ideology, didn’t reach enough people to spawn the mass movement that eventually produced the groundswell of support (however fleeting) to make Goldwater the GOP’s surprise nominee in 1964. Those ideas required a distribution medium with the omnipresence to bring them to the masses.

Beginning in the mid-1950s, that medium, Matzko contends, was radio. The voices spreading conservative ideas over the airwaves belonged to a handful of right-wing religious broadcasters like Carl McIntire of the “Twentieth-Century Reformation Hour” and Billy James Hargis of “Christian Crusade,” who preached a sharply fundamentalist, anti-Communist, pro-segregationist gospel that never shrank from personal attacks on public figures (up to and including the president) or political advocacy designed to spur their listeners to populist political action.

With the rise of television and the emergence of major national networks in the mid-’50s, Matzko maintains, the nation’s vast array of independent AM radio stations, desperate to survive, offered virtually unlimited bandwidth at rock-bottom airtime prices to broadcasters looking for an outlet for their ideas. And unlike magazines, newspapers, and books, conservative radio programming offered listeners an opportunity to consume right-wing ideas considered far outside the Eisenhower- and Kennedy-era mainstream without having to pay for them or carry around visible evidence of their extremist influences.

At the dawn of the 1950s, conservative broadcasters were virtually nowhere to be found on the AM dial, but by decade’s end, Matzko writes, “a dozen conservative broadcasters aired on a hundred or more independent stations nationwide, most on a daily basis.” Airing on only two stations in 1967, McIntire’s show enjoyed syndication on 475 stations in 1964, with more than 20 million weekly listeners. Although McIntire, Hargis, and their contemporary H. L. Hunt are virtually unknown today, Matzko compares the size of their audiences and the sweep of their influence to Father Coughlin in the 1930s, Pat Robertson in the 1980s, and Rush Limbaugh in the 1990s.

Matzko provides a striking example of how the radio right spurred its listeners to action and influenced national policy with the stranger-than-fiction story of the Polish Ham Boycott of 1962, in which McIntire took aim at grocery stores that stocked food from Soviet-bloc countries, and inspired a mass revolt of suburban housewives against shopping at stores that sold Polish ham. Numerous retailers responded quickly, emptying their shelves of Eastern European foods, and Congress in turn rebuked Kennedy’s free trade policy.

Matzko argues that the reason other historians—at least until recently—may have underestimated the impact of right-wing broadcasting in the years preceding the Goldwater campaign is that they have always looked at surges in the prevalence of conservative ideas in terms of demand rather than supply—essentially, as outrage over some cultural or political shift that arouses interest ideas that would lack intrinsic appeal in other circumstances.

“This framework leaves historians to ask which hot-button issues were most effective at stimulating conservative outrage and activism,” Matzko writes. “The hunt for the “correct” issue has led to internecine historiographical squabbles over which issue was most important or most pervasive. This is not to suggest that demand-side explanations of the rise of the Right do not have value. Conservatives did indeed respond to the sexual revolution, the spread of communism, the civil rights movement, and a host of other cultural developments in the mid-20th century. The problem is that the other half of the equation—the supply of conservative ideas—has been neglected because of the fixation on demand.”

The Radio Right, by contrast, points to the saturation of the AM airwaves with conservative talk in the late ’50s and early ’60s as an explanation for why those ideas amassed influence in McIntire and Hargis’ heyday. He goes on to suggest that the strategic application of that supply—say, in states like Wyoming with outsized senatorial influence relative to their population size, and thus bigger bang for the broadcasting buck—enabled the Radio Right to heighten its impact in ways that many historians may have overlooked.

Even if historians may have for the most part have underestimated the Radio Right’s ideological sway, make no mistake: the Kennedys did not. As a result, they solicited the help of UAW President Walter Reuther and his brother Victor to neutralize the Radio Right’s threat before the 1964 campaign.

Much of Matzko’s book chronicles how the Reuthers’ recommendations—among them, targeted IRS review of preacher/broadcasters’ tax-exempt status and the use of the FCC and the Fairness Doctrine to force stations airing conservative broadcasters to provide equal time, free of charge, to alternative (liberal) viewpoints—were implemented in subsequent years. These efforts led to the erosion of the Radio Right’s financial base and imposed what Matzko characterizes as the onerous burdens of the Fairness Doctrine (equal time for opposing views) and its indirect chilling effect on the dissemination of provocative ideas.

Matzko then documents the role of radio and religious right broadcasting in the resurgence of the conservative movement and the Reagan Revolution of the 1980s, as the Fairness Doctrine unraveled, beginning with Reagan’s own immensely popular Viewpoint radio show, which helped the so-called “Great Communicator” retain substantial popular and political mindshare between the end of his governorship in early 1975 and his presidential campaigns of 1976 and 1980.

The Radio Right is a whale of a tale, and an illuminating alternate take on the “How in the world did we get here from there?” question that adds to our understanding of how the seemingly impenetrable post-war liberal consensus gave way to the Reagan Revolution, the confounding rise of Trumpism, and the self-perpetuating minority-rule conservative dominance that persists in American national politics today.