Radical Cities: Across Latin America in Search of a New Architecture 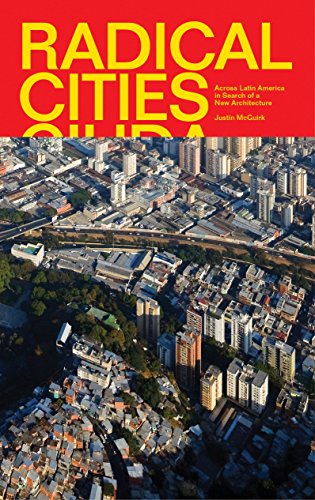 “In sum, Radical Cities offers a rich buffet of inspiring sketches of imaginative approaches to improving quality of life in more livable settlements. These stories are relevant not only to the Latin American context, but offer a global lesson . . .”

All eyes will be on Rio de Janeiro when two of the greatest shows on earth—the World Cup and the Olympic Games—come to town in 2014 and 2016.

The Brazilian government wants the place and the people to look their best under the global spotlight. But the cidade maravilhosa (the marvelous city) is known also as the cidade partida (the divided city) referring to blatant juxtapositions of extreme wealth and poverty. Slums sprawl right next door to the Sheraton.

Will the world remember images of stunning beaches and bathing beauties, iconic Sugarloaf Mountain, gleaming new towers, stadiums, and rapid transit? Or will these be eclipsed by the one and a half million living in favelas (squatter settlements) and by massive protests about the billions spent on facilities for short-lived spectacles at the expense of public services.

“We want FIFA-standard schools and hospitals” chant the demonstrators, even here in the home of “the beautiful game” of soccer. It is the first time in a generation that the citizenry is brimming with political energy.

In Radical Cities: Across Latin America in Search of New Architecture, art critic and curator Jason McGuirk explores how this reemerging civic potential is being tapped by a new generation of activist architects, social organizers and populist leaders.

In contrast to the modernist social housing mega-projects rooted in urban renewal via slum clearances and relocations, these new “idealistic pragmatists” often practice “urban acupuncture.” This involves small but focused interventions concerned more with human needs than with architectural style, arising from a renewed regard for slums as the solution rather than the problem.

With many countries in Latin America experiencing 80 per cent urbanization rates, and given the shrinking social spending budgets mandated by neo-liberal policies,  governments have no choice but to recognize the resourcefulness of the residents of the “informal city” (aka slum) in solving their own housing needs in situ and to facilitate their upgrading efforts.

In the process, Latin American architects seem to be rediscovering their social purpose in a new approach to urban planning  which is radical not in terms of left-wing politics but as a form of practice. “This is not a book about objects, but about actions.” And the activist architects’ challenge today is all about creating contexts, conditions, connections and communities so that they can make a real difference as agitators against poverty and inequality.

To illustrate the wide range of exciting new ideas for improving quality of life in the informal city, Mr. McGuirk takes us on a tour of Latin America interviewing some fascinating people as he visits innovative projects in Chile, Argentina, Peru, Brazil, Venezuela, Colombia and Mexico.

We go to a community in Northern Argentina, where the Tupac Amaru social movement is self-building social housing around a vast water park and Jurassic-themed playground. “Swimming pools are a relatively cheap way of making poor people feel rich . . . You can’t put a price on the impact this swimming pool has on a community’s outlook.”

In Northern Chile, we are taken to a new form of social housing where only half the house is built, allowing the families to add the rest according to their means within a defined structural framework. People get to individualize their homes and do the additions themselves.

Community consultation also plays a major role in slum upgrading projects currently underway in Rio de Janeiro. Here, public spaces and transport are being used to build connections between the formal and the informal city.

Most visible are new cable cars which link the hillside favelas, which have not even been included on official maps of Rio, with the “legitimate” city below. At the same time new public spaces are inserted into the crowded streetscapes for breathing space and to foster a sense of local identity.

Medellín, Colombia was the first Latin American city to pioneer the cable car as a literal bridge between rich and poor which makes the informal visible. Inspired by Alpine funiculars, the cars are a life-changing link cutting the commute from the slums to the city center from a couple of hours to a few minutes.

It is ironic that Medellín has become a role model as it was known as the murder capital of the world in the early 1990s when Pablo Escobar ran the drug cartel. In a dramatic turnaround, a sequence of mayors decided that new public spaces such as library parks and infrastructure could stem the violence. And they did, largely through the organization of different civic stakeholders into a united front via top-down activism.

In Bogota, we meet the wonderfully eccentric former mayor Antanas Mockus, who used highly unorthodox methods to instill an ethos of civic responsibility in a notoriously dysfunctional city plagued by crime, violence, and traffic congestion.

Mockus reduced road accidents by hiring mimes to direct traffic and by distributing soccer-style red cards to people so that they could shame reckless motorists. A guns for toys program was a great success. He dressed in a red cape as Super Citizen, and a TV campaign to save water showed him in the shower turning off the water while he soaped. Using performance art, alternative pedagogy and canny instincts for manipulating the media, Mockus instilled a new civic consciousness.

In Caracas, Venezuela we are taken to Torre David, where squatters have occupied an incomplete 47-story skyscraper intended as a banking headquarters. Here, 3,000 people have organized themselves, brought in electricity and water pumps and turned the tower into a vertical village—without elevators and often lacking external walls!

In sum, Radical Cities offers a rich buffet of inspiring sketches of imaginative approaches to improving quality of life in more livable settlements. These stories are relevant not only to the Latin American context, but offer a global lesson about the need to acknowledge the informal sector as a vital part of the city’s ecosystem and to involve the inhabitants in building more participatory, inclusive and equitable communities.

The book is not always easy to read, however. The case study-vignette approach makes the narrative choppy. McGuirk writes quite well, but assumes that the reader has some architectural knowledge. He drops names of iconic figures (Le Corbusier is not exactly a household word these days). Some technical terms and theoretical concepts need elaboration. The segment on the pioneering PREVI housing project in Lima bogs down in identification of the styles of the famous architects responsible for the model homes.

Nonetheless, it is well worth persevering with this read, particularly as the media zoom in on Rio de Janeiro for the upcoming world sports spectaculars, which only underscore the imperative of meeting basic human needs before a global carnival is deserved.