Radiant Human: Discover the Connection Between Color, Identity, and Energy 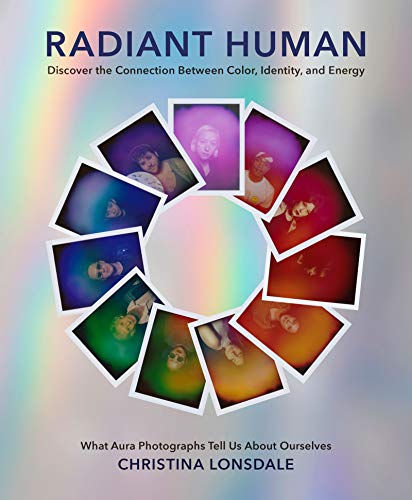 It was probably a very good idea not to include the words “aura reading” in the title of this book, even though that is 100 percent what it is about. In trying to bill this as a conceptual art project, Lonsdale gives herself a buffer from critics who will most likely write this off as a personal self-discovery reflection with a glossy metallic cover; it gives the book a fighting change.

For some reason, it’s hard to find the credibility. Lonsdale’s background could have something to do with it. Hippie parents. Raised on a commune in Taos (in the 1980s). Homeschooled herself through the GED. Practiced Intuitive Massage at the age of 15. Influenced by Barbara Ann Brennan and Cindy Sherman—Lonsdale could actually be a machination of the two which Vogue calls a “Dutch painter on acid.”

Having wandered into a a crystal shop in New York City’s Chinatown, Lonsdale had her aura photographed with an AuraCam 6000 camera and promptly bought her own camera to launch a new art project. Interested, at first, in the camera itself, Lonsdale saw beyond the initial image of her “selfie” into something deeper, which she calls, “the fundamental energy of our inner selves.”

“I wanted to take the idea behind the selfie—digital self-exploration and self-actualization through image—but go one step further to showcase the self behind the selfie; that is, the energy beneath the construct. The goal was to present energy as identity.”

The assumption is that the AuraCam 6000, with its electrodermal hand sensors and its Guy Coggins proprietary algorithm, can translate input data (i.e. energy) into color that is visible and overlaid in a photograph, and that these colors carry meaning—as defined by Lonsdale. Even though Lonsdale claims that a subject’s identity can be seen and known, she also clearly reiterates that each photograph is simply just a snapshot of a moment in time. Her explanations of an image reek of Tarot card readings.

With thousands of photographs taken inside of her custom designed traveling dome tent, there is least some consistency in the controlled environment where, presumably, the color will be captured somewhat reliably. Color is critical in this experiment and Lonsdale spends the majority of the book detailing each color, color combinations (orange-red, blue-purple, etc.), and color characteristic: bands, cruising, gradients, shades/blends, and dots.

The intensity and location of the colors are equally important in interpreting an energy. A photo is divided geometrically into three parts with the top half indicating the subject’s thought/consciousness and the bottom half equally set between the self on the left and the persona on the right. By assessing where colors, combinations, characteristics, and intensities are in the photo, Lonsdale attempts to map out a person’s mood and energy identity, believing she can differentiate between one and the other.

Orange-red, for instance, indicates a person is, “caught between two worlds. On the one hand, this person values stability and practicality (red) and, on the other, requires a certain level of spontaneity and variety (orange) . . . if red is in the lower left area . . . chances are they feel more of the challenges internally . . . with orange in the lower left area . . . chances are this person is breaking free of something, taking a risk of some sort.” Or if none of this resonates, perhaps it is something else like a “balancing attempt” or a “synergistic quirk,” missing the mark completely.

Beyond the individual selfie portrait, Lonsdale also explores relationship portraits. She gathers work-groups together to create a picture of their collective energy. A group full of orange aura energies indicates a creative bunch. A hand full of purple or indigo energies indicates visionary leadership. Couples and families are also included in the experiment with some portraits taken over time as witnesses to a series of personal struggles that are encountered over the years and corresponding changes in auras. But of course the aura readings will be different year by year since they are clearly different moment by moment!

There must be something to Lonsdale’s conceptual art career given that she has been an artist in residence at the Whitney, has worked with the likes of Nike and Google, and has in the past had some attention from the New York Times and Vanity Fair. Radiant Human does not seem to carry any weight here, and it falls short of hitting Lonsdale’s goal of proving that a person’s aura energy photograph is actually a photograph of their “selfness.” It is more like a glitzy side show attraction than a substantial main event.