The Race for What's Left: The Global Scramble for the World's Last Resources 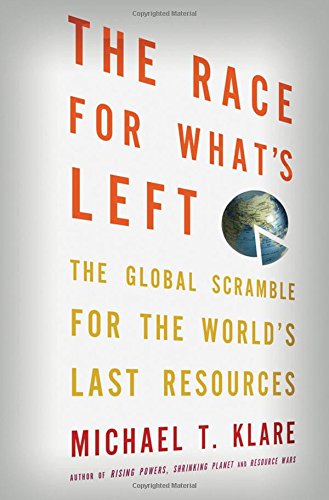 Back when the theory of evolution was new and Western societies were reeling from the implications, Thomas Henry Huxley actively championed Darwin's new view of human origins. Asked why he prevailed in this distressing practice, he said, “We must know what is true so we may do what is right.”

Michael T. Klare's latest book is a clear, measured, exhaustively researched declaration of what is true: The Industrial Age is at the critical point where the materials it requires are declining, the number of people demanding those materials is increasing, and both corporations and nations are preparing to go to extremes to source them, with frightening consequences. (As for doing what is right, more about that later.)

The Race for What's Left: The Global Scramble for the World’s Last Resources delivers the breadth readers have come to expect of this veteran analyst of the global friction produced when growth-obsessed economies meet finite natural systems.

Dr. Klare, who is defense correspondent for The Nation and director of the Five College Program in Peace and World Security Studies at Hampshire College in Amherst, begins in the Arctic with a Russian submersible planting a titanium flag on the ocean floor—one of several questionable claims by nations with Arctic borders for the mineral riches that lie beneath the ever-more navigable pole.

By the end of the book he has taken the reader on a tour of industrial economies' contortions to secure critical—and finite—resources: deep offshore oil and gas (with sharp insights on the Gulf's Deepwater Horizon disaster); tar sands and “unconventionals,” including overhyped shale gas from hypertoxic fracking; new extremes in mineral and rare earth element extraction (without which our techno world goes Amish); and agricultural land, now being snapped up by countries whose soils are less fertile than their populations.

Dr. Klare clearly states the pattern: “. . . the logic of depletion is unyielding. Every fresh advance in mining and drilling techniques leads to the exploitation of hard-to reach reserves, until those deposits, too are exhausted—and then the cycle of exploration and production begins anew in even more demanding circumstances.”

Those circumstances, as he details throughout this compelling book, include not only financial costs and technical demands, but the consequences of wholesale ecosystem destruction, human rights violations, and armed conflict.

These limits have not affected “developing” economies' plans for growth but have instead packed the field with ever more aggressive players. For example, China and its companies are everywhere in this book, offering loans for favorable extraction deals in such diverse countries as Guinea (iron ore, bauxite); Niger (uranium) Afghanistan (untapped reserves of copper, iron ore, and rare earth elements), and Brazil (oil trapped under 1.5 miles of water and 2.5 miles of rock, salt, and sand).

Dr. Klare doesn’t limit his examination to the declining feedstocks of fossil-fueled, climate-changing industries; many of the “green technologies” that could take their place use rare earth elements and critical minerals that are in short supply.

Electric and hybrid cars use lithium batteries; solar photovoltaic panels depend on gallium and iridium. Many of these substances are expensive and toxic to refine and are extremely vulnerable to supply chain disruption from countries holding major deposits—China and Afghanistan are two. Alternatives, Dr. Klare warns, have not yet been developed.

Unfortunately, like so many reports of resource and economic contraction, Dr. Klare treats global population growth as a problematic given, and instead of warning about this root of the “what’s left” problem, starts the discussion with how nations can find enough stuff to supply more people with what they need and want.

A poignant case in point highlights the moral issues: Saudi Arabia, like many wealthier nations, is snapping up other countries’ farmland to feed its own growing population (hello—you live in a desert . . .). Jets fly in fresh produce from Saudi-owned greenhouses and farms in Ethiopia while local people suffer malnutrition.

“Eventually, continuing with current industrial practices will simply prove impossible. And precisely because implementing a whole new industrial order will be a lengthy task, any substantial delay in beginning that work will prove costly, as resources keep dwindling and prices continue to rise.”

Whoever (nations, corporations) adapts quickly and well will benefit while others grind to a halt, he warns. Unfortunately, he is vague about what these adaptations look like, beyond mentioning “new technologies” and “efficiency.”

Efficiency, by all means; but one hopes Dr. Klare is not one of those expecting an as-yet-unnamed techno-fix to our contraction problems (especially since he’s explained how many current “green” technologies rely on rare earth elements and critical minerals).

If, however, he is using “technology” broadly—as in soil-building keyline plows and passive solar design—as part of his “new industrial order” –he’d pass Nobel physicist and polymath Richard Feynman’s test: “For a successful technology, reality must take precedence over public relations, for nature cannot be fooled.”

Even if Dr. Klare doesn’t mark a clear course for the “race to adapt,” The Race for What’s Left is a compelling, even frightening book that deserves a wide and varied readership.