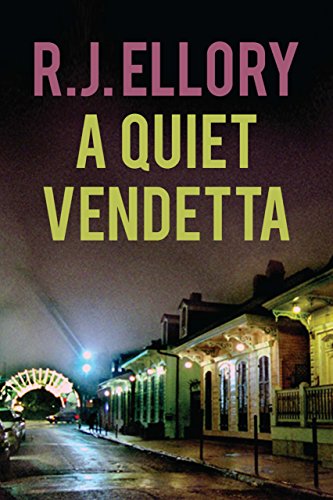 “A Quiet Vendetta is highly recommended for readers interested in the psychological makeup and motivation behind the actions of both the hunter and his prey. The faint of heart who would prefer a straightforward whodunit mystery are better advised to choose the works of a less creative writer.”

After a call that begins innocuously: “Mr. Ray Hartmann? Welcome home to New Orleans, . . .” FBI Unit Chief Stanley Schaeffer informs said Mr. Hartmann that “You’re down here for the duration, my friend. We are the FBI, and we’re in charge. This isn’t just any girl who’s missing; it’s Catherine Duchane, daughter of the governor.” His tone leaves no room for rebuttal.

Yet all Ray can focus on are the faces of his own wife and child as Carol once again will have to explain to Jess why he did not make their meeting at Tompkins Square Park the following Saturday. This time he will lose them both for sure.

Thus the conflicting double-life experiences begin for Ray Hartmann, a minor bureaucrat in the New York District Attorney’s office, who has no idea of why Ernesto Perez, a career mafia hitman, has agreed to speak with him—and no one else. In exchange, Perez has agreed to disclose the location of the kidnapped daughter of the governor. But first Ray must listen to Perez’ detailed account of his past relationship with the Mafia—both in Miami and in Cuba, then later in New York

Why me? Ray wonders. Why did he pick me? I’ve never even heard of him!

A Quiet Vendetta is another gleaming example of author R. J. Ellory’s ability to intermingle multiple complex storylines of seemingly unrelated genres over long time periods, ending with a smooth and fittingly realistic integration of events.

In the present story, Ray Hartmann, an astute, empathetic detective known only to those in his immediate sphere of influence, one who is about to lose his family due to his inability to handle personal or job-related stress without the aid of alcohol, is pitted against the patient storytelling expertise of Ernesto Cabrera Perez, the killer who made his bones in the organization by murder, the first at age 15. Each subsequent killing moves him quietly up the ladder in his adoptive Mafia family without ever changing his status as an outsider.

Through skilled use of flashbacks, the reader learns of the many murders attributed to Perez—including that of Jimmy Hoffa; we also learn of Perez’ involvement in the Kennedy brothers’ demise.

Skilled integration of facts, fiction, and a generous dose of name dropping allows the author to weave a believable story which one would be hard-pressed to disprove. Eventually the two men gain a modicum of respect for one another without compromising their own philosophical and moral stance. Perez controls the timeframe of the interaction, thus directly influencing the levels of Ray’s stress and frustration during the countdown of the “rule of fives”—which brings Catherine’s death one step closer as each point is ticked off.

Initially, A Quiet Vendetta starts off frustratingly slowly, manifesting itself as an ordinary crime story riddled with an overabundance of minutiae forged with descriptions befitting the finest of artistic masterpieces.

Over time these exacting finer points began to pull the countless settings and characters together in such a manner as to surely make even the most articulate of word-weavers proud. That said, keeping track of the many crime-family members and their adversaries on the side of law enforcement continues to be a bit of a challenging read for the most judicious of readers. The author ought to consider a one-page genealogical cheat sheet for us.

Yet once again, despite minor frustrations, R. J. Ellory proves himself a leader among the royalty of crime writers with this five-decade-long saga of Mafia history forming the framework for an exciting, well-constructed tale that ultimately becomes one of two men attempting to redeem themselves for their many individual sins against humanity.

A Quiet Vendetta is highly recommended for readers interested in the psychological makeup and motivation behind the actions of both the hunter and his prey. The faint of heart who would prefer a straightforward whodunit mystery are better advised to choose the works of a less creative writer.