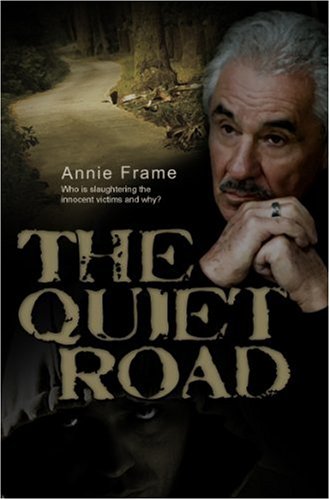 British police officer Frankford Lucas has dreamed about the Quiet Road ever since childhood. It’s an old cobblestone thoroughfare where he always encounters a cloaked figure who magnetically draws him closer. Lucas finds sanctuary and comfort inside the fabric and folds of the mysterious figure’s garments, providing him with an escape and protection from the harsh world of reality that exists outside his dreams.

He quickly rises through the ranks of the police force to become Chief Superintendent in a city within Great Britain. It seems luck is always on his side as the people he is destined to replace on his way up the ladder sometimes meet with ill fates. He occupies his current position when the former Chief Superintendent suffers a massive mental breakdown, leaving the door open for Lucas to step in and assume his important and prestigious new duties.

Not long after reaching the pinnacle of his police career, Frankford Lucas begins revisiting the Quiet Road in his dreams. This time, however, his nighttime reveries take an ominous turn when he begins to dream about murders . . . real killings that are taking place in his city and for which he is responsible to investigate.

Most police officers would treasure the valuable evidence to be gained from witnessing a murder take place, and knowing who the killers are, but when it comes in the form of a supernatural vision, it’s tough to explain. For a skeptic like Lucas, a man who scoffs at the idea of second sight and who questions the credibility of clairvoyants, it’s even harder to accept.

The Quiet Road is a place where reality and the supernatural intersect. It’s where Frankford Lucas ventures deeper each time into the mysterious figure’s cloak, lured by the hypnotic power it seems to hold over him. With each journey comes a new murder, new clues, and daytime encounters with the spirits of the victims who clearly know Lucas witnessed their deaths. When his lead detective brings in a clairvoyant to assist with the investigation, Lucas’s world turns upside down. The medium seems to know more about the Chief Superintendent than even he knows.

The Quiet Road is a story about the supernatural, the spirit world, death, life, and benevolence and malevolence. It is a journey into the world of mediums and clairvoyants—people who can see, and in some cases, even communicate with entities that float in and around the physical world . . . spirits both good and evil which most of us can never sense. The mediums are quiet heroes who help a disbelieving Lucas rise above his lifelong cynicism about such things, and who help him to understand and unlock the conundrum of the Quiet Road. The tale is enjoyable, yet serious and sobering in its implications. The forces arrayed against the protagonist are powerful, and the meaning and impact they have for mankind are profound. If Lucas fails in his struggles, the entire world may just fail, as well.

Annie Frame delivers a wonderful story that can make a believer out of just about any non-believer. She uses the backdrop of a criminal investigation as the structure around which she inserts her insights into the spiritual world. As the story evolves, so does the reader’s understanding and appreciation of the mysterious realm of the spiritual. It is chock full of characters, too many at times, making it a bit difficult to juggle and track them all, but methodical and logical in its approach, nonetheless.

The Quiet Road is recommended for people who enjoy supernatural thrillers, especially the crime-drama type.

Mike Angley is a retired USAF Special Agent and Colonel and the author of the Child Finder Trilogy.