Quiet in Her Bones 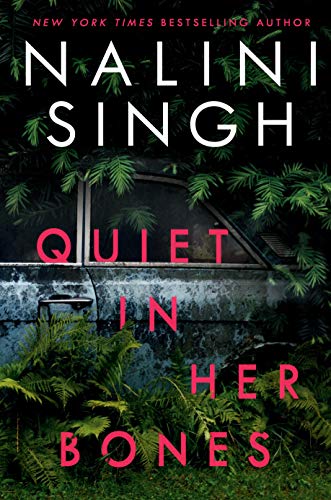 “Singh’s brilliant book hooks us from the beginning and doesn’t let go. The descriptions are vivid, the setting is intriguing, and the plot provides twists.”

Ari Rai’s mother has been missing since Ari was a teen. Meanwhile he’s become a rich, world-famous author after writing a thriller. He’s moved into a sleek apartment in Auckland. A car accident that hurts his head and breaks his foot sends him back to his father’s home. He’s still convalescing when Constable Neri comes to the door. Nina Rai’s body has been found in her Jaguar, not far from their cul-de-sac.

Nina wasn’t in the driver’s seat. Presumably her own murderer drove her off the road.

Thus starts Ari’s desperate obsession to solve a decade-old murder. His first suspect is his father, whom he can’t stand. Ishaan Rai is an ultra-rich, ultra-commandeering CEO who married a village woman from India expecting non-judgmental compliance but found himself with a bobcat. Ari loved his mother unconditionally but acknowledges her many faults. She partied. She drank to excess. She stepped out on an abusive husband but didn’t leave him. Instead she spent his money, taunted him, challenged him, and fought with him.

But she loved her son. For this reason, Ari must learn the truth. He needs closure on his past. He remembers the night his mother disappeared, the fight she had with his father, the crystal tumbler he threw at her. She left the house drunk and never returned. She died in the overgrown area that swallowed up the woman as well as the car.

The proximity of the death scene is an important clue. Ari realizes that on the chance his father is innocent, he should consider all the neighbors who live in their cul-de-sac, a protected community where the rich go to lead quiet, luxurious lives—as potential murderers? All the neighbors knew his mother. Some of the women made friends with her. Some of the men slept with her. Others merely observed.

Ari’s no saint, either. Having grown up in a household of lies and fights, he’s never managed to keep a girlfriend or make close friends. He’s tormented by the car accident that has caused a fuzzy brain he can’t control. He goes to some of his psychiatric or physical appointments but misses them with a disregard for himself and for professionals. He’s troubled by his childhood, his distant past, the recent past, and the present. He’s loved women and left them until finally the one he really wanted left him.

Ari shows multiple sides, however. He’s nice to his father’s meek second wife, Shanti, and takes tender care of his young half-sister. He’s friendly enough that he can worm information out of all his neighbors. Slowly he chips away at the histories of each one. Their reaction to his mother was never neutral. They adored or abhorred her, made allies of her, gossiped with her, or avoided her. Any might have decided that she should no longer live.

This modern first-person narrative is a spot-on mystery thriller. The luscious writing demands to be savored a couple of chapters at a time. Tension emanates from every interaction Ari manages with neighbors and relatives. Half the time he even fights himself. He’s a brusque narrator, refusing to sugarcoat his feelings no matter how coarse. But he’s not quite sure he’s telling us the truth. He doesn’t remember what happened the night of his mother’s murder, not exactly, yet he has to know. And slowly, teasingly, he begins to share what he learns.

As Ari remembers his mother vividly, he struggles to come to terms with her death: “The smell of the pungent and sharply sweet perfume that had always made me a little dizzy, the flawless creamy brown of her skin, the bitter laughter, it was all gone. What remained were bones abandoned and forgotten in the midst of an endless and dark green quiet.” Yet he can’t remember his own movements on the night of Nina’s disappearance. Did he chase after her, hoping to stop her from fleeing? Did he think he could exert any control? He blames himself for not being more attentive and for not remembering. Nearly friendless, he condemns himself as he races in and out of memory. He only takes solace in his little sister: “‘I don’t think you’re stupid,’ she added with fierce loyalty. ‘You wrote a whole book with no pictures.’ I forced out a grin. I knew I hadn’t hurt my mother. I could never hurt her.”

Singh’s brilliant book hooks us from the beginning and doesn’t let go. The descriptions are vivid, the setting is intriguing, and the plot provides twists. The language is lyrical yet crisp. But the reason this book is so very good stems from the complexity of the characters. Each is drawn in a careful portrait. Nobody gets off lightly here. Nor should they. The people in Ari’s cul-de-sac are normal neighbors. They’re full of intrigues and secrets. Since they might turn against us at any moment, we should remember to stay on guard.