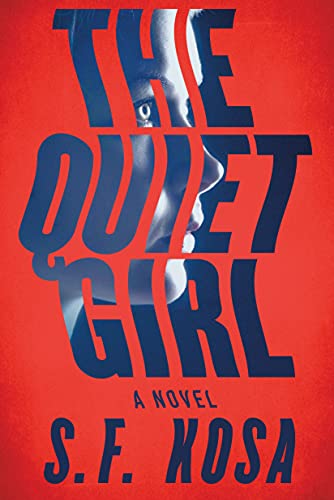 “Kosa blends secrets, lies, revenge, and deceit into a complex stunner of a book.”

The story opens with a warm, homey scene of a woman humming a tune as she lovingly bakes a cake in her kitchen. The author describes the scene in brilliant detail, the measuring, the mixing, the stirring, the batter pouring into cake pans that are then slid into a preheated oven. Then comes the frosting. The powdered sugar, the softened butter, the extract. And the food coloring. Blue, yellow, and pink. It's a you-are-there Martha Stewart moment if there ever was one.

Ah, the cake is done and out of the oven it comes. The aroma wafts right off the page. Time for the frosting, and what follows, the actual application of the frosting as it adorns the cake is absolutely mouth-watering.

But wait! This isn't a cookbook. Isn't The Quiet Girl a mystery? What is so mysterious about baking a cake:

But, oh, my friends, read between the lines, and you will see mayhem coming at the speed of a runaway train.

After the kitchen scene, she introduces her sympathetic character, Alex Zarabian. He's beside himself handling a crisis at work while at the same time trying to make amends with his wife Mina, a well-known romance author, after a raging argument. He wants to apologize, only now he can't find her. He calls everyone he thinks might know where she is, goes every place he thinks she might be. No luck. So he heads to the vacation home she purchased with her royalties thinking she's tucked herself away writing:

". . . I need to be understanding if she's in the middle of a scene or a chapter or even one of her reveries where she sits there, fingers resting lightly on her keyboard, expression blank, eyes unfocused. If she's into her work, I'm going to smile and tell her I love her and I'm sorry and we'll talk later . . ."

He doesn't want to argue anymore, he just wants her. They met at a book signing and got married after a six-month whirlwind romance. He slowly comes to realize he doesn't know as much about Mina as he thought. In fact, there's a lot he doesn't know about her.

Getting nowhere in his search for his wife, Alex reluctantly goes to the police and files a missing person report. But it isn't long before he gets impatient and frustrated at what he sees as a disinterested, slow rolling investigation. His interference and constant questioning threaten to antagonize the detective handling the case.

The story then switches to Layla, a restaurant kitchen worker who comes across flaky and flighty, but that's her way of hiding the fact that she often gets lost and doesn't remember things including her past. The people she works with think she's a bit off. Not all there:

" . . . Her eyes and nose burned. A droning buzz filled the space between her ears. Her vision flashed with blotches of red and black. She braced her palm against the wall."

With episodes like that, her job becomes iffy, and she's on the verge of being fired. With no place to live, the bartender Esteban kindly takes her in as a roommate.

One day a waitress doesn't show up, and Layla is enlisted to fill the spot waiting tables. A customer recognizes her as someone named Maggie Wallace. Layla freaks out when he approaches her.

Next, we meet Maggie Wallace. She's waking up on the side of the road after being hit by a car:

"The sky overhead was a cheerful and cloudless blue. She stared up at it while her ears throbbed and buzzed.

"'Did someone call 911?' Sound returned, the shield of white noise pierced by a man's shouted plea. He hunched over her, blocking her view of the sky. 'You ran right out in front of me!'"

In the hospital, she's told she'd been running from a pursuer. She doesn’t remember that.

But don't worry! No spoilers here! Readers will see this coming, and perhaps are meant to. Remember. Mina is still missing!

This is not light reading. And kudos to Kosa for her excellent writing. It's tricky to write scenes with a character living in one reality who doesn't remember her past, then to write scenes with her alter ego living in a different reality who also doesn't remember her past. This is what will keep readers enthralled to the surprising end though admittedly the internal dialogue of characters who have no memory can be anxiety producing. The payoff is readers eventually find out who the cake is for.

Kosa blends secrets, lies, revenge, and deceit into a complex stunner of a book.

It is also lightly sprinkled with F-bombs, which some readers will find unnecessary in an already colorful story.