Quiet Desperation, Savage Delight: Sheltering with Thoreau in the Age of Crisis 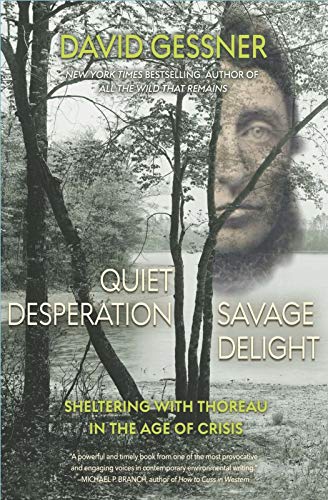 “David Gessner succeeds in this friendly and reflective study of a great writer and our times.”

David Gessner, the author of a dozen books on environmental themes and cultural figures in America (Theodore Roosevelt, Edward Abbey, Wallace Stegner) is the winner of several book awards and the chair of the Creative Writing Department at the University of North Carolina Wilmington. Now approaching 60, he takes on a lifelong hero in the figure of Henry David Thoreau.

Though Thoreau’s example of keeping a journal and making a hut away from busyness inspired him, Gessner is quick to suggest the variance in their lifestyles. Gessner is a husband and father and often likes to share a beer with others. His rugged hut in North Carolina cannot compare with the precision of Thoreau’s cabin. They do think alike on the subjects of our earth environment and its possible survival, and they take activist stands for individualism, science, and social justice, but their methods of thinking differ.

While he describes Henry as a most imperative writer, chiefly in Walden, which is full of reader advice if not demands, Gessner is more relaxed in tone and structure. Thoreau structures his sentences and paragraphs with deliberation for effect, as one might a speech, while Gessner, who also gives speeches, is looser, often falling into a ramble that yet rings with solid truths. Thoreau’s books are more lectures, Gessner’s more casual talks that flow in several directions yet arrive at a focused theme.

Gessner overstates some when he claims, “Henry is all imperative. All musts and shoulds. Even when not explicitly didactic, he speaks in what I’d call the implied imperative. He is one of our deepest thinkers, but at the same time, he is the worst ranter in your dorm room after his second bong hit. And yet, while you could say his words are prescriptive, it is really up to us, his readers, how prescriptively we take them. The prescription, it turns out, might be one we need to fill. Thoreau is astringent medicine. But for now he is necessary medicine.”

The thesis of this book in fact is that right now in the arc of this restrictive Covid-19 pandemic we can learn much from fellow isolate Henry David Thoreau. There are countless references to the pandemic and its cost on our lives as individuals and community and a world. Each chapter begins with a new tally of those infected and those who have died from the virus. Yet the author sees possible gains in this solitude, even if it is forced.

Ginger Strand finds Gessner’s treatment of Thoreau as both broad and reliable. She states, “Thoreau becomes a conduit to thinking about friendship, parenting, race, aging, technology, home, climate change, justice, and death. Gessner shows us how, rather than burying ourselves in old books, we might use them to go out and meet the world, in all its wild and broken beauty."

Here is the reflective David Gessner at his best, bringing a clearer perspective to a situation by recognizing its complexity and our struggle:

“So perhaps what I’m asking of myself, and of you, is that we hold two opposite things in our minds at once. One is a grim picture of a weed-filled, overheated planet that we can’t shy away from looking at if we’re to have any chance of preventing it. The other is a still wild world, and therefore a joyful, varied, verdant world, where boars roam the streets and green herons roost and sea turtles haul out on the beaches and flamingos pink the ponds and grizzlies return to their historic ranges. That wild world—the whole wondrous nonhuman creation—is poised to resurrect the whole wondrous nonhuman creation—is poised to resurrect itself, ready to come bursting back—if we only give it the chance and room and air to do so.”

David Gessner succeeds in this friendly and reflective study of a great writer and our times.