In the Quick: A Novel 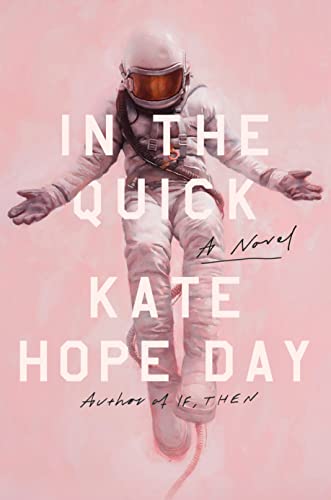 As an old saying goes: “The whole is greater than the sum of its parts.”

That saying does not apply to this novel. It’s got lots of great parts but they never fully come together, leaving a choppy, often confusing, and unsatisfying story based on a dramatic space-adventure premise—with a shot of torrid passion—that doesn’t deliver.

Yes, we do get space adventure. The best parts of the book are the realistic descriptions of the physical conditions of space travel and operating on another planet—and the scary hazards of both.

Unfortunately, there’s almost no emotional component to these physical experiences. The author researched the heck out of the technical side to present it believably, then left us with characters who don’t connect on the kind of personal level that takes readers along for the ride.

The main character, June, is a precocious engineer-inventor. But she lacks the social skills needed to relate to others. This is well conveyed by the narrative’s narrow first-person viewpoint. Every moment is filtered through June’s tunnel-vision brilliance, which has little room for other people’s reality. Conversations aren’t really dialogues—not even warranting quotation marks—because June hears and speaks but does not successfully communicate in two directions.

Except with machines. Her ability to understand what something is, and what it does, or should do, and how to enable it to function correctly and efficiently, lets her advance through the ultra-techy world of aeronautics and become an astronaut and technician. The only people she can even start to communicate with are of the same type. None of them seem to have curiosity about one another, and whatever emotions they do reveal come across more as “acting out” than expressing.

The space program in the book is familiar in concept from current times but advanced from where we are today. The period of the novel is never specified so we have to assume the near future.

This is one of many orienting facets of the novel that aren’t provided. The author sets up situations and leaves either readers or characters, or both, to figure out the missing pieces. This technique invites analytical assessment of what information is truly needed to tell a story.

The main character also lacks a backstory. We meet her at age 12 living with her aunt and cousin and already alienated from everyone except her deceased uncle. He was a primary contributor to the space program in general and the genius behind the technology enabling space exploration—culminating in a mission that goes afoul and obsesses June through her life.

He also founded an astronaut training school, which is where June ends up almost as a punishment. Her inventor instincts, undirected and unconstrained after her uncle died, lead to her nearly burning down the house. This motivates her aunt to move her along to some place that can deal with her.

Because of the connection to her uncle as school founder, June is accepted several years earlier than the normal required age. This is appropriate, on one hand, because her intellect is equal to or beyond her peers. On the other hand, one would expect a special student related to the founder to have something resembling guidance or mentoring by an adult concerned with her welfare.

No sign of that. Instead, she is thrust into the program like the cliché of being dropped into a pool to sink or swim. The school itself is presented as an academic boot camp, physically miserable and inconsistently disciplined, structured to encourage creativity, bonding, and endurance.

Well, the creativity part happens. June lives and works with a small group of brilliant students but doesn’t bond with any of them, despite their intimate contact and interactions for many years on Earth, in orbit, and on another planet.

June seems, page after page, to be more robot than human. We learn about her mental and physical experiences but nothing about her heart or soul. Again, we are left to infer or deduce. The book skips the “emotional why” conventionally used in storytelling; that is, motivation and reaction, conflict and resolution, personal stakes at risk. We just get June watching and feeling through her brain and body, while those around her are equally incomprehensible because she can’t extrapolate or empathize.

It amounts to no character arc to June’s story. The plot doesn’t go anywhere, either. The book jacket describes it as June being “haunted by the mystery of Inquiry, a revolutionary spacecraft powered by her beloved late uncle’s fuel cells. The spacecraft went missing when June was twelve years old, and while the rest of the world seems to have forgotten the crew, June alone has evidence that makes her believe they are still alive.”

Yes, June finds that evidence and persists in her belief. Readers keep reading in hopes that her belief will lead her, and/or her cohorts, to finally discover what happened to the crew and, ideally, to save them. That’s the story arc one would expect from the packaging.

What readers get is space adventure as a conveyance for an esoteric character study. The novel is ideal for book club or classroom discussions about the difference between stories and literature, the nature of life and consciousness, the qualitative distinctions between feelings and expression, the limitations of humanity, and the like.

But if you just want a space adventure with characters engaged in the experience, look elsewhere than In the Quick.