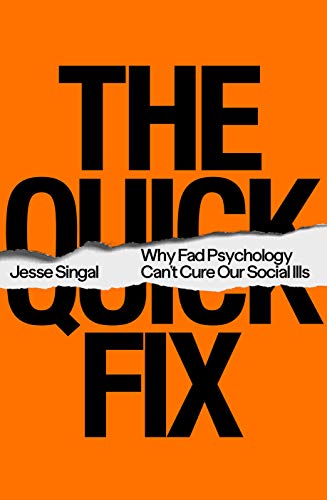 Jesse Singal says his “book is an attempt to explain the allure of fad psychology, why that allure is so strong, and how both individuals and institutions can do a better job of resisting it.”

He explores how people are influenced by subtle, hidden forces. He discusses that pop psychology has allure because people are seduced by facile bullet-point simplicity in their daily lives that aims quickly to fix their problems.

He examines the fallacies of fad psychology in several areas: promoting self-esteem, conceptualizing super-predators, powerlessness and power-posing, the problem of extrapolating limited research to the wider world, the idea of “grit,” implicit bias, social priming, and the non-replicability of studies.

The author says that present-day behavioral science, as dispensed by psychologists, “shifts the focus [from government and companies] toward improving and optimizing and repairing individuals rather than understanding how they are influenced by big, roiling forces beyond their control.”

Singal examines notions of systemic change in society’s structures––institutions, organizations, educational systems, and corporations. He finds it more difficult to target individual change than systemic ones. Singal does not find psychological targeting of individuals to be helpful.

If we are lured by the notion that things influence us that we are unaware of, do these unaware things arise from inside us or do they come from outside us? And, how best can best we make changes in people to better their decision-making?

He advocates for institutions to have cognizance of how people self-sabotage and to apply psychological know-how to governing, schooling, and running corporate life.

The author talks about the irrationality of people and the need for nudging their behavior in easy ways for their own betterment. He finds government and other societal structures are best for nudging us to do better for ourselves than our own individual judgment dictates. He finds these nudges successful: saving money, contributing to retirement plans, and eating healthfully.

The book is engaging with lucid writing. It omits several viewpoints about why quick fixes do not solve social difficulties. Omitted are mention of the contributions of psychiatry, social work, and other disciplines that have a lengthy history of social science research, as well as research into human psyches.

Singal displays a common political bias, saying that government is doing less for people in recent times, causing people to be “even more responsible for [their] own well-being.” Studies of governmental budget and reach show that government assistance and programs have grown for decades.

Of concern is the book’s conclusions that to remove decision-making from individuals and place decisions for one’s well-being in the hands of other’s judgments who inhabit government, institutions, and corporations is a slippery slope. This practice could lead individuals to lose a sense of personal control by being aware that someone else––government, educational institution, corporation––is deciding actions for you and making decisions about what is best for you.

The author does not probe the research that attends to individual inner psychological characteristics of people and why they are easily seduced or are irrational in decision-making. Instead, he hones in on the larger systems in which we find ourselves. According to Singal’s research, it appears more helpful solely to change the interface of people with schools, corporations, and workplaces than it does to seek change in individual people.

The author does not discuss all explanations for why quick psychological fixes do not help us. He examines systemic solutions, but not individual solutions that enhance autonomy. If he had also examined his topic from the standpoint of looking at individuals and how they can be programmed for poor decision-making by unaware internal psychological forces, he would have provided a comprehensive study.

By becoming aware of internal influences, people can make better decisions through their own volition. This enhances personal agency, self-esteem, and confidence better than any unseen “nudge,” created by an entity. Research exists to support this omission from The Quick Fix.

Christine B.L. Adams, MD, is co-author of Living on Automatic: How Emotional Conditioning Shapes Our Lives and Relationships, winner of the 2019 Independent Book Publishers Award Gold Medal for Psychology/Mental Health. She has been a child and adult psychiatrist for 40 years in private practice, academia, community mental health, for the Social Security Administration and for the Department of Defense.