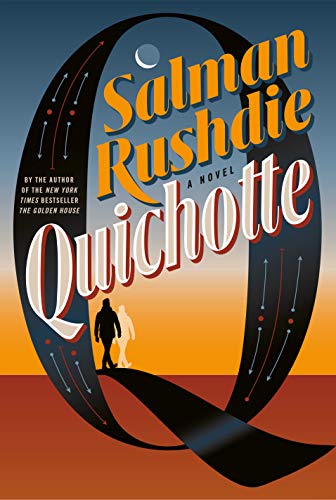 This modern-day retelling of Don Quixote combines ripped from the headlines current events; a fantastic mix of every favorite Twilight Zone episode (along with a host of other pop-culture Easter eggs); a love story both poignant and tragic; family betrayals that resonate through generations; and a flawed, yet charismatic main character who as “quixotic” as Cervantes’ original Don Q.

Quichotte follows our hero, a middle-aged, forced-into-retirement pharmaceutical sales rep, as he strives to find meaning for his untethered, nomadic life. He’s a drifter, his trusty steed a Chevy Cruze, who lives from motel to motel, his diet an unending stream of nostalgic TV shows until a flick of the remote finally gives him his life’s purpose: to woo and win a woman whom he’s never met and who has never heard of him, the glamourous talk show star, Miss Salma R.

As Quichotte pursues his obsessive love, traveling across country and subjecting himself to seven valleys of trials and tribulations, the world around him becomes as unhinged and unpredictable as his own confused and often delusional mind. Quichotte realizes this, but accepts it because, “There were no rules anymore. And in the Age of Anything-Can-Happen, well, anything could happen . . . And a TV star might miraculously return the love of a foolish old coot, giving him an unlikely romantic triumph which would redeem a long, small life, bestowing upon it, at the last, the radiance of majesty.”

The theme of a world hopelessly broken follows Quichotte on his quest: “broken people, broken by loss, poverty, maltreatment, failure, age, sickness, pain, and hatred, yet trying in spite of it all to cling on to hope and love, and these broken people—we, the broken people!—may be the best mirrors of our times, shining shards that reflect the truth . . .”

Quichotte’s encounters range from magical—a son conjured from a falling star and a wish; to violent face-offs with racial intolerance; to the fantastic, including people morphing into mastodons. Yet the reader is so enamored of Quichotte’s hopeless quest that we accept everything, even as Quichotte accepts it as he topples over the fine line between reality and insanity.

Intermingled with Quichotte’s quest to reach his Miss Salma are her own story; the tale of Quichotte’s imaginary-turned-real son, Sancho, who embarks on his own Pinocchio themed journey; along with the tragic tale of the “author” who created the fictional character of Quichotte, adding even more of a metatextual feeling to this layers-upon-layers tale until at the end it is revealed to be a richly textured, tightly woven tapestry of a novel.

Fans of Rushdie’s lush prose and capricious plotting will definitely want to schedule uninterrupted time to savor his latest, Quichotte.