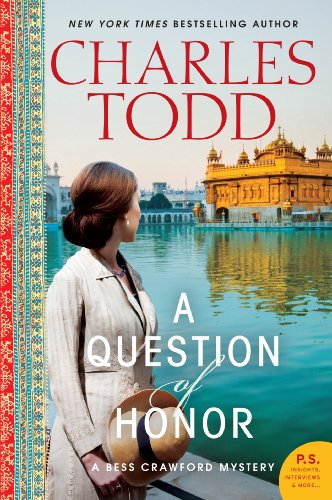 The prologue in this fifth book in this charming series takes the reader back to heroine Bess Crawford’s idyllic childhood in India.

Her father, the Colonel Sahib oversees a British regiment in colonial India. Lieutenant Wade, a soldier under her father’s command is accused of five murders. They happen while he’s escorting a wife and mother back to England, and everyone in the regiment is shocked.

Ten years later, Bess, now a nurse at the front lines of World War I, hasn’t thought of Lt. Wade in a while. A patient tells her he has seen him fighting in the trenches. Is it merely the power of suggestion when Bess thinks she sees Wade a few days later?

She decides to investigate and once and for all clear any lingering rumors around her father’s name.

War is hell, and there Bess sees the worst of it on the front lines. But there’s also a lot of men coming in for doctoring, and Bess gets information quickly (sometimes it seems faster than GPS) from who served with who. Bess has the advantage of using her father’s name when necessary, and investigates with his major domo Simon (sure to be her husband in coming books) back in England.

Bess’s meddling—she often shows up on people’s doorsteps to ask questions—seems quite normal in times of war, where the social niceties have faded, as the general population deals with men coming home without limbs, or worse, but common, shell-shocked.

If Bess seems impervious to the slaughter that happens on the battlefield, the reader can write if off to her stiff-upper lip upbringing, but it seems clear that she can’t continually undergo the stress of battlefield nursing without some scars.

There is a strong domestic thread in this book, where Bess’s mother (the colonel’s lady has a quite a network) is helpful in tracing Wade’s upbringing through England. Indeed, this line of detecting information gradually unlocks and explains Wade’s actions.

Still the horror of war is never far from anyone’s thoughts.

History is always better understood through a lens of time, and perhaps now, almost 100 years along, we can more dispassionately study the causes and effects of the Great War.