Queens: Women in Power Through History 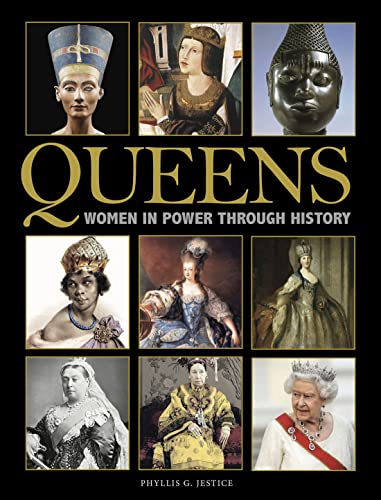 “Jestice succeeds in proving that queens have played important parts throughout history—and continue to do so.”

Phyllis Jestice is a historian, and her educational background shows in this brilliant tour of the nature of queenship throughout history and all over the world. Rather than the usual list of European monarchs, Jestice demonstrates an impressive range as she introduces readers to queens from Africa, Asia, the Pacific Islands, South America—wherever she can find evidence for women rulers.

The trick in covering such a big subject—and the way Jestice writes, it is a big subject —is how to organize such a wealth of material. Jestice organizes her chapters chronologically, from the ancient world to modern times, a logical structure. Within each chapter and as threads that continue throughout the centuries, Jestice looks at how women come to rule. Queens are considered “unusual” rulers in every region. Kings are naturally the norm. Jestice acknowledges this and goes on to explain how women have managed to reign despite deeply entrenched sexism that continues to this day. A sexism, she reminds us, that has affected how queens have been seen and described even to this day. Her response to this well describes the mission of this book:

“Female rulers are often described as ambitious rather than bold, as devious rather than diplomatically astute and as intriguers and meddlers, all characterizations that are destructive to the reality of women’s lives in the world’s monarchies. Even genealogies still often leave out the women of royal families, overlooking their genuine contributions. To some extent, we will never know these great women of history as well as we know their menfolk; the sources simply leave too many gaps. However, we can and will do better in giving the women rulers of history the recognition they deserve.”

Jestice has certainly done better. She digs to find sources wherever she can and uses what she uncovers to introduce us to queens from every region, religion, and culture. What is striking is that despite any differences, women have gained power in the same ways, through family positions, through regency, through dynasties.

One of the most effective ways for a woman to rule, all over the planet, was as the mother of a son too young to exercise power. Another avenue was to govern while a husband was away at war, a common occupation for kings across the globe and through the millennia. Jestice takes these disparate women, from China, from Japan, from Ethiopia, from Aleppo and gives them their rightful place in history. She introduces little known figures, such as Princess Edelayo of 15th century Benin, represented here in a gorgeous ivory mask, and deepens our knowledge of more famous monarchs, such as Hatshepsut in ancient Egypt.

The book is more than an engaging history of women who all deserve to be better known. Each page features illustrations carefully chosen to represent the wide cultures these women came from. There are medieval manuscript paintings, Renaissance carvings, even photographs. The range of visual material is as broad and as rich as the capsule histories of these queens. Naturally, given such a wide subject, no queen gets her story completely told, but enough is explained to provide a sense of real contribution and to spur curious readers to investigate further. Even better, Jestice succeeds in proving that queens have played important parts throughout history—and continue to do so.