The Queen's Vow: A Novel of Isabella of Castile 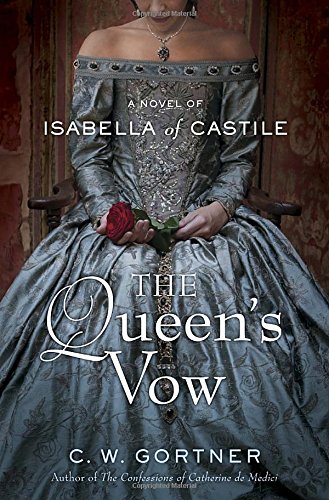 “a masterwork by a skilled craftsman . . . make a vow to read this book.”

Who knew that King Ferdinand and Queen Isabella shared such a passionate romance?

Thanks to the imaginings of renowned historical fiction novelist C. W. Gortner, the 15th century Spanish monarchs sizzle in The Queen’s Vow.

Mr. Gortner implicitly understands the underpinnings of the heart of a powerful woman. She’s a military commander and a mother. She’s a royal pawn and a supreme ruler. She’s a wifely figurehead and her husband’s equal, if not, superior. Isabella is a complicated contradiction and Mr. Gortner tenderly adds fascinating shades of light and dark to his depiction. But most of all, he makes her come alive on the page from a nubile maiden to Columbus’ champion.

Where The Queen’s Vow shines is in the loving yet beleaguered relationship between Ferdinand and Isabella. Surviving many attempts by her brother and his minions to marry her off to a Portuguese royal, Isabella outwits their schemes by uniting with the man of her own choosing. Through their holy vows, they are able to bring together the divided kingdoms of Castile and Aragon to form a fully united Spanish realm.

Politics aside, the romance of their attraction is nothing short of poetic in Mr. Gortner’s prose:

“Though we stood in a crowded hall for this first public meeting, witnessed by dozens of eyes and ears, it was as if Fernando and I were alone in our recognition that without each other, life could only be an incomprehensible labor.”

From their first impromptu dance as children in the garden in Segovia to the formation of their unshakable bond forged through decades on the throne, they never lose faith in each other. Despite Ferdinand’s numerous infidelities and Isabella’s proclivity to emasculate her husband in public, the two depend on the strength they find in their partnership. This sense of teamwork provides the resiliency that finally drives the Moors out of their country after the imposed threat of centuries of occupation.

Their remarkable achievements are also tempered with vagrant obstructions concerning the religious rights of their subjects. Through harassment, intimidation, and finally by decree, they order every Jewish person who refuses to convert to Catholicism to leave the country. The Spanish Inquisition is an abhorrent stain on the reputation of an otherwise spectacular reign.

While daring and adventuresome throughout the book, Isabella meets her match when she comes face to face with Christopher Columbus. Her head is turned by the handsome, arrogant explorer. Despite a bankrupt treasury mortgaged on her crown jewels, she is willing to invest in his daring mission to cross the Ocean Sea.

Little does she know the epic results her patronage will bring. Highlighting this momentous occasion, Mr. Gortner beautifully describes the historic nature of their illustrious meeting:

“What was it about this man, that he could rouse such emotion in me? I now believed he was indeed someone I’d been destined to meet, an act of fate I could neither resist nor evade.”

What Mr. Gortner does so brilliantly is dramatize a vast multitude of historical events into a compelling, riveting drama. Nearly 400 pages of battles and betrothals, plots, and persecutions move at a brisk pace as seen through the eyes of the woman who experienced it all firsthand. It is a masterwork by a skilled craftsman to weave the fictional with the factual in such an entertaining manner. It is a tale that will delight romantics and historians alike.

Overall, make a vow to read this book.