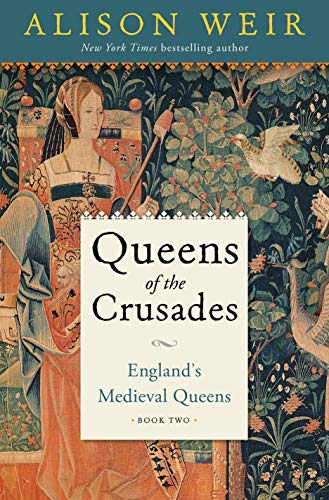 “The author writes clearly and entertainingly of the rich history of the Plantagenet queens of England and for an audience unfamiliar with the subject.”

Noted scholar Alison Weir completes the second of two volumes of the “story of the history of England through the perspective of its queens” in the age of the Crusades in the 13th Century, although only three of the queens physically participated in the Crusades.

Queens of the Crusades covers the lives of five remarkable and sometimes conflicted women “in a continuous, chronological narrative.” They lived in a world of amateur soldiers, courtly manners even among enemies, knights, and “no concept of nationhood and patriotism,” only “realms and principalities.”

These noblewomen proved to be more than their children, dowries, marriage, and survival. They came from southern Europe and “brought with them the sophisticated culture of those regions, trading opportunities, Byzantine and Moorish influences and a more civilized style of living.”

Eleanor of Aquitaine “was one of the towering female figures of the Middle Ages” and “inspires the imagination today.” The others “deserve to be better known.” During the absence of the kings, these “very able” queens “had ruled as regents.” “They had no formal authority, but might weld great authority.”

“Much of the action” “takes place on a wider stage,” in the Angevian Empire “a great continental domain.”  “The Aquitanian lordships and castles were controlled by hostile, feuding vassals.” Their overlords who ruled this one-third of today’s France were arrogant, educated, privileged, and sophisticated.

Weir has a challenge in Eleanor of Aquitaine, subject of many volumes and of movies but still “revised certain aspects of her story.” Duchess Eleanor, or rather Aquitaine, was first queen of France and as such went on crusade to the Holy Land with her husband King Louis VI. After her annulment, she married Henry II, King of England, Duke of Normandy, and Count of Anjou, to become the mother of the Henry’s “four eagles” that included Richard I and King John, and all of the famous history that entailed.

As queen, Eleanor was “a ruler confident in her power to enforce her decrees, working in concert with her husband.” Henry provided her with a rich income as well as “castles, towns, estates, and manors.”

More detail on Berengaria of Navarre, wife and widow of Richard the Lion Heart, appears in Queens of the Crusades than what one finds in biographies of the famous husband. “She was to play a passive role” “remained very much in the background” but she did accompany her husband to the Holy Land.

Isabella of Angoulême, queen to King John of Magna Carta fame, became part of the saga of her husband’s failure to save the empire Henry and Eleanor had built. The future of France would be decided by John’s disastrous reign.

“John was certainly unfaithful to Isabella.” Her dowry came at the expense of what had been Berengaria’s property, but then John seized almost of Isabella’s income. Battles over the incomes and property among the royal widows continued for years after John’s death.

Alienor of Provence, wife of the inept Henry III, “clearly had her finger in many pies and was punctilious in safeguarding her rights.” “She was no figurehead” and would rule England in Henry’s absence; he “a devoted, uxorious husband—a family man in every sense.” Alienor took charge of England after the defeat and capture of her husband son at the battle of Lewes.

Eleanor of Castile married Edward I who at times proved “autocratic, short-tempered and intolerant,” as well as “violent, lawless and cruel.” “It is clear that Eleanor’s love for her husband always came first.” Edward nearly died on the successful crusade they made to the Holy Land. She and Alienor, combined, “dominated the English establishment for nearly seven decades.”

The author writes clear and entertainingly of the rich history of the Plantagenet queens of England and for an audience unfamiliar with the subject.  At appropriate places, Weir gives needed background to explain the lives of these legendary women.

As Queens of the Crusades is “intended for a general readership,” the author “kept references to a minimum and restricted them to original sources.” This illustrated edition has color images. It also has useful maps, a select bibliography, and annotation.