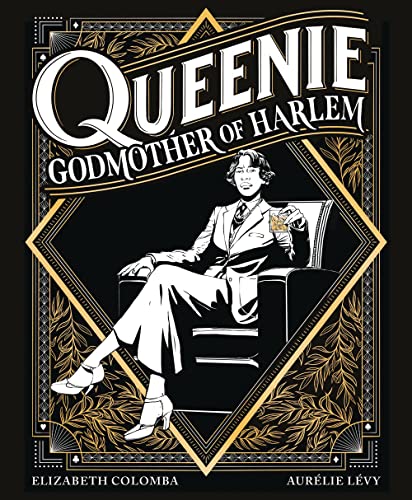 Born and raised in poverty on a plantation in Martinique, Stephanie St. Clair (Queenie) eventually arrives in New York. In the 1930s; she makes a name for herself as a racketeer and bootlegger. Known for her generosity toward the poor of Harlem, she is also ruthless (and incredibly successful) in her domination of the “numbers” racket—the underground lottery played by the poor of Harlem. When Prohibition ends in 1933, the Italian mob, left without bootleg liquor to sell, are now interested in her operation, and she must fight for herself and her business’ survival.

The cover of Queenie: Godmother of Harlem immediately draws the reader in. Queenie, drawn in stark black and white and framed in shimmering gold foil, presides over the reader. It makes one want to jump right into the meat of the book and immerse oneself in the illustrated story.

It’s important not to skip the introduction, which is in prose and imageless. All about the Harlem Renaissance, it gives crucial context and speaks of the general sentiment of the era. It describes the intertwining of the thriving arts and cultural scene of the ’20s and ’30s; the omnipresence of gangsters thanks to Prohibition; and the day-to-day realities of the ordinary, impoverished citizens of Harlem. It also places Queenie squarely at the heart of the numbers racket. The material is rich, and the reader would have been well-served had it been illustrated.

The artwork is powerful and gripping. Each character (even the minor ones) is infused with vitality. Queenie is unflinchingly fierce. In the first pages of the book, she is released from prison. Her driver and right-hand man, Bumpy, notices they are being followed. Queenie tells him to stop the car, gets out, and as she smashes in the headlights of the police car that was following them, declares, “Tell your boss I ain’t afraid of him!”

Flashbacks of Queenie’s childhood and first years in New York (including several hard rape scenes), pepper the book and give a glimpse into what Queenie has to overcome. When, in present time and at the height of her power, she is sexually assaulted by the police commissioner, it shows just how fragile a woman’s place in the world is and the inner strength and determination Queenie needs to prove to the world that nothing can beat her down. When Bumpy asks her how she gets through it, she answers, “I am a woman and a mobster, Bumpy . . . I do with a lot of things.”

Throughout the book, there is a consistent sense of place and cultural history. When Queenie attends a rent party it includes the music of Thelonius Monk and the liveliness and joyful frenzy of the scene.

The one challenge of the book is deciphering the who’s who of characters and how they all relate to each other. Scenes move hard and fast without much introduction to the various players. Understanding the connections between the Italian mob, the police and city officials, and Queenie takes work. It isn’t always clear who is in allegiance with whom and why and how events play out. The list of historical figures at the end of the book is somewhat helpful but not comprehensive enough.

There are brief interludes throughout the book to explain the numbers game, Queenie’s wealth, and the way gangsters did business (“The Schultz Way”). They are interesting and important bits of information but jarring in their departure from the hard-nosed flow of the rest of the novel.

Overall, Queenie: Godmother of Harlem is worth the read. Colomba’s mesmerizing artwork and Levy and Colomba’s inspiring prose celebration of Queenie’s strength, sparks curiosity about the real Stephanie St. Clair—her entourage, her era, and the culture in which she was steeped. The complexities of Queenie’s character are deftly woven together throughout the book, and finally come to rest in the closing scenes. Queenie has led a tumultuous but full life. Her life in Martinique and her life in New York, although so vastly different from each other, are inextricably part of her soul.

In the overwhelming sea of male-dominated mobster stories and histories, it is refreshing to read about a female gangster who illustrates the power of womanhood and stands uncompromisingly strong, independent, intelligent, and fierce.