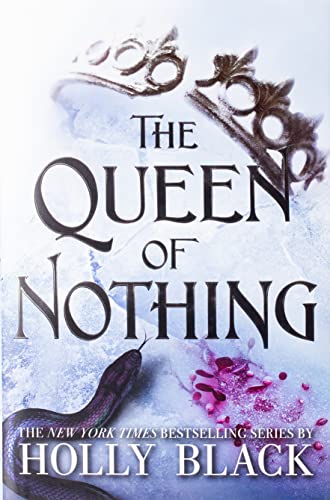 “Holly Black weaves a compelling spell that’s certain to ensorcell her readers. Her vivid descriptions of both faeries and humans bring her characters to life, and the twists and turns of the plot culminate in a satisfyingly magical ending . . .”

As this intense and compelling conclusion to Holly Black’s Folk of the Air trilogy opens, Jude Duarte, the mortal High Queen of Faerie, has been exiled to the human world. While living with her sister and little brother, she runs errands (usually dangerous) for local fairies to cover their rent. Back in Faerie, her cruel High King Cardan rules, but various fae (including Madoc, Jude’s adoptive father) scheme to dethrone him.

Jude bides her time, determined to reclaim everything Cardan took when he betrayed and banished her. Opportunity arrives in the form of Jude’s twin sister Taryn, whose life is in danger. Taryn has killed her abusive faerie husband Locke and begs Jude to take her place at the inquest because Jude can resist any faerie glamour that might compel her to tell the truth of what happened.

Seizing the chance, Jude returns to Faerie, masquerading as her sister. Black’s descriptions of the land and its inhabitants are strange and magical, as in this passage depicting the tent of the Court of Teeth:

“At the center of the tent rests three thrones—two large and one small. They seem to be sculptures of ice, with flowers and leaves frozen inside them. . . . A blue-skinned girl sits on the small one, a crown of icicles on her head and a golden bridle around her mouth and throat.”

Jude’s plans go awry at the Elfhame inquest when King Cardan draws her aside into his private chambers and calls her by her true name. He has seen through her ruse. Before the pair can deal with their unfinished business, agents of Jude’s father Madoc attack, spiriting the girl they think is Taryn away to his camp. There, Madoc’s army is massing, preparing to attack the High King. Jude decides to spy on them, but when she tries to rescue a former ally that Madoc holds captive, her father is waiting, having seen through her ruse. They fight, and although Jude is wounded, she escapes, fleeing back to Elfhame with the help of her sisters.

When she arrives, the court is in peril. Allies are wavering, an assassin seeks to end Cardan’s life, and Madoc’s army approaches. In Black’s lean, evocative prose, Jude describes her state of mind at reaching this nadir: “I feel like a constellation of wounds, held together with string and stubbornness.” Nevertheless, the High Queen persists in defending her kingdom. Reconciled at last with Cardan, Jude helps him win over some of their uncommitted allies.

But then, when Madoc comes to parlay, his actions unleash a terrible curse and panic spreads through the land. In the hardest decision she’s ever made, Jude must choose between her ambition and her humanity.

Throughout this tale of Faerie, Holly Black weaves a compelling spell that’s certain to ensorcell her readers. Her vivid descriptions of both faeries and humans bring her characters to life, and the twists and turns of the plot culminate in a satisfyingly magical ending that ties up all the loose threads of this terrific series.