Queen Hereafter: A Novel of Margaret of Scotland 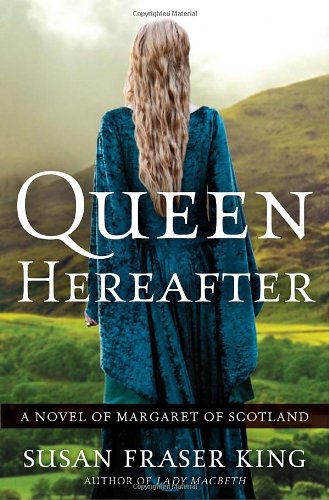 Royalty is common fare for historical fiction, but the lives of the saints are usually not. In Susan Fraser King’s Queen Hereafter, the two themes are melded in the personage of Queen Margaret of Scotland.

The novel has a twist of the familiar by incorporating many of the characters from Shakespeare’s Macbeth. The religion and politics of medieval 11th century Scotland are shown through a woman’s point of view—either that of Margaret, herself, or the fictional bard/harpist, Eva, who Fraser King assigns the role of Lady Macbeth’s granddaughter. The pair represents the conflicting roles of Scotland—the arrival of a polished, sophisticated court versus the tradition of the warrior kings of old. Their relationship is rooted in opposition, yet forged in mutual respect.

Margaret is the beautiful blond in exile; a Saxon married to a Scottish king. She is disposed English royalty thanks to the Norman invasion of William the Conqueror. Her aim is to replace Scotland’s Celtic church with that of the official Roman rite. She seeks to bring luxury, education and esteem to a court often looked down upon by the rest of Europe. Having always desired to be a nun, she instead puts her all into making her husband, Malcolm Canmore, a literate, sophisticated monarch instead of being best known as the killer of Macbeth.

Yet Margaret’s religiosity borders on the extreme. While pregnant, she continues to observe a schedule of strict fasting and prayer. Fraser King likens her avoidance of food to anorexia. She depicts Margaret as feeling it holy to deny the babe in her womb the nourishment it needs to enter the world. Yet the queen opens the castle gates to all children needing a decent meal, while refusing to partake herself. Her fanatical addiction to observe the hours of devotion leaves her tired and worn down. She frequents the chapel at all hours of the night and is found on her knees before the altar at dawn. She even frees prisoners from her husband’s dungeon and attempts to take gold from the royal treasury in order to feed and clothe the poor. This leads Malcolm to call her, “his little thief.”

While Margaret is devoted solely to the Lord, it is Eva who is caught between two masters. As a hostage, she is taken from her home in the northern district of Moray to Malcolm’s court. While there, her grandmother induces her to spy on a book that Malcolm is having commissioned that seeks to paint Macbeth in an unflattering light. However, despite her clandestine mission, Eva quickly comes to admire Margaret filling the role of the queen’s most trusted and beloved confidant.

Throughout the novel, Eva struggles with protecting the reputation of her blood kin while battling her deepening affection for the Saxon queen. Yet Eva’s actions are not determined by the queen’s behavior. It is Malcolm’s treatment of her that influences her judgment. His arrogance regarding the demise of her relatives and the condescension he bestows on her as a female bard become primary factors in her decision making.

Fraser King takes Queen Margaret’s story as far the birth of her third child. Famous events are recounted such as the miracle of the queen’s Bible remaining completely intact after falling into a river. Another inclusion is the historical watermark at Abernathy where Malcolm kneels before William the Conqueror in order to stop a Norman invasion.

Fraser King does a great job in bringing the landscape of Scotland to life. From roaring woodland waterfalls to the churning of the North Sea, the rugged, harsh environment surrounding the palaces of Dunfermline and Dun Edin is vividly expressed. She also gives a nod to the Scottish people from the pilgrims Queen Margaret encounters on the road to St. Andrews or the mob of frightened Saxon slaves at the gates of her castle. The reader feels the pride the people have for their homeland.

The one drawback is the repetition of detail. Fraser King fleshes out Margaret’s character, having her enjoy romantic interludes with her husband and feeling an innate connection to the Benedictine priest, Brother Tur. Yet her daily life leaves much to be desired. She is continually shown praying, sewing, or attending functions in the great hall. Her inner life is full of worrying about whether she is praying enough. While a canonized saint is most assuredly fixated on God, it would have been refreshing to see Fraser King more fully explore what filled her days. Instead, her created character of Eva demonstrates more vivacity and moral turmoil. The fictional Eva adds more interest to the story than the historical Margaret.