Queen of Bones (A Havana Mystery) 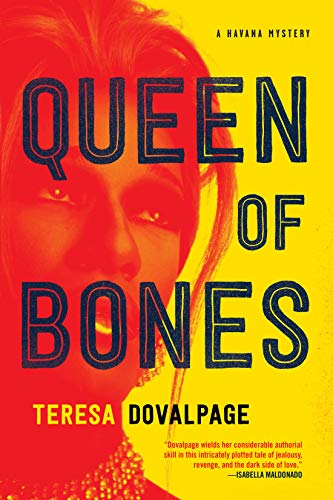 “Although she doesn’t yet have the knack of creating deeply compelling characters, Dovalpage’s writing hints at the possibility that she will be to Cuba what Donna Leon has become for Venice. Savor the excitement of this author’s early career and enjoy seeing her strengths mature.”

The second Havana, Cuba, mystery from Teresa Dovalpage, Queen of Bones, diverges from the tourist gaze of her first one, Death Comes in Through the Kitchen, to instead see the city’s life through the eyes of a returned native son.

Juan left the island 20 years earlier, escaping on a boat. He’s prospered as a construction worker in Albuquerque and brings his American wife Sharon for a visit to his homeland. Ostensibly he’s there to catch up with his old college buddy Victor. And he hasn’t told his wife, but he’d also like to rediscover two of his former girlfriends, especially Elsa, his “true love” from the teen years.

The book title reflects a strain of Santería mysticism and fortune telling under the bustling urban world. At a festival for Oyá, the “queen of bones” who dances wearing a necklace of bones, Juan’s other former girlfriend, Rosita, finds this orisha entering her body and dancing with it until Rosita collapses on the floor. Afterward, she confesses to the ceremony leader:

“’Padrino, do you remember that boyfriend of mine who left Cuba?’ she said. ‘Juan. The one I couldn’t forget.’

‘Oyá told me he would come back, like a salmon swimming upstream. Does it mean he’s returning to Cuba, Padrino? Juan hasn’t been back in twenty years, as far as I know.’

‘Maybe,’ Padrino said. ‘But do you know why salmon swim upstream, mija?’

If Juan’s salmon sort, he’s clearly a fish out of water. Running a contractor crew of Mexican labor in the U.S. has not prepared him to find his old buddy Victor transformed into Victoria. Nor is he ready for the news Victoria has for him about Rosita.

“He looked down and tensed a little. ‘What happened? Did she have a baby?’

Victoria shook her head. ‘A baby? What she had was a nervous breakdown. Tried to kill herself. Someone found her in the ISA bathroom just after she’d slit her wrists. I still remember it; there was blood everywhere—it looked like a murder scene.’

Juan gasped. ‘Was she okay?'

‘Obviously not. I mean she survived, but that girl was messed up . . . It was like a soap opera, Juan’s girls going away.’”

Juan’s horror quickly shifts to self-pity and excuses, setting up a cosmic imbalance that begs to be rectified. And when murder begins to multiply around him—when the orisha who is queen of the cemeteries seems to have taken charge—then Lieutenant Marlene Madrino steps in to try to sort out the earthly consequences of this behind-the-scenes spiritual conflict. And the lieutenant almost immediately wonders what’s up with her old mentor, Padrino, who has become a santero.

Bingo! The book at this point shows its connection to Dovalpage’s first title, so readers of one book will enjoy bringing their awareness to the other (no matter which sequence they’re read in).

Dovalpage is also a skilled tour guide, opening up the Cuba of two decades ago, the island nation today, and the beliefs and results of Santería. Deftly unfolding details within the action, she reveals Cuba and its people as rich with fascination and depth.

Although she doesn’t yet have the knack of creating deeply compelling characters, Dovalpage’s writing hints at the possibility that she will be to Cuba what Donna Leon has become for Venice. Savor the excitement of this author’s early career and enjoy seeing her strengths mature.