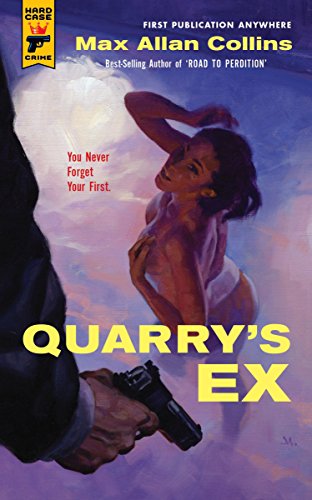 In storytelling, writers look for niches, commonly called “cracks,” that set their stories and characters apart from the bazillion other novels out there. The crack that Max Allan Collins created for his protagonist, Quarry, is that he’s a hit man who hits other hit men.

The backstory is this: Vietnam turned Quarry into an emotionless killer. He returned home to find a man screwing his wife. The next day, he visited the man, a mechanic, who was working underneath a car. Quarry kicked out the jack, crushing the man and killing him. The DA had sympathy because Quarry was a vet. No charges were pressed. But the cold-blooded murder brought Quarry to the attention of the Broker.

The Broker’s business was murder for hire. About 50 hit men worked for him. For reasons unstated, Quarry killed the Broker and stole the dossiers of all the hit men employed by him. Quarry now makes his living by trailing the hit men and discovering who their targets are. He then approaches the targets and offers to kill the hit men—along with whoever paid for the hit—thus eliminating the threat. Quarry saves lives, is the noblest of hired killers.

In Quarry’s Ex, the target is a movie producer shooting a film in Boot Hill, Nevada. The suspects: the gangster whose girlfriend said producer was sleeping with or someone wanting to see the movie go unmade in order to collect the completion bond, the money insurance companies pay out when a film can’t be finished.

Quarry’s Ex is a straight up pulp novel. It has quirks. Quarry addresses the reader directly, a narrative style that pretty much died out in the Victorian Era. Collins works hard at copping the pulp style. Sometimes the text is slick, sometimes clumsy.

Consider this description of Quarry murdering a man by driving over his head: “When I drove the front right wheel over his head, vehicle barely moving, the crunch made an unsettling sound in the stillness.” This is good, clean pulp writing.

Now consider this: “He had very light blue eyes that would have looked great on a sixteen-year-old baby-doll blonde. This assumes the blonde wasn’t a heavy drinker and her baby blues hadn’t gone bleary and spidery red behind granny glasses. His face was pale and splotchy, like he had radiation poisoning, his nose a bulbous vein-shot affair.” Umm . . . gesundheit.

There are other problems. The text is at times rambling and repetitive, the same info given to Quarry through the voices of various other characters. We’re given irrelevant backstory about secondary characters. Much of the necessary backstory isn’t interspersed throughout the novel, but delivered in the form of info-dumps. Collectively, all this makes the story drag. Pulp should move. A dearth of story events and a glut of description doesn’t help either.

The modus operandi of the murder is flawed. The producer is addicted to Percodan. The killer intends to substitute the producer’s medication with larger doses of Percodan and cause him to OD. This just isn’t going to happen to an addict, because he has built up a tolerance for the substance. Unless force-fed the contents of the entire bottle, all that would likely happen is that the producer would thank the hit man for adding some kick to his buzz.

And strangest of all, the producer just happens to be married to Quarry’s ex-wife. Throughout the story, it appears to be a coincidence, bad writing. But the ending implies that Quarry is there for the benefit of his ex-wife: to save her current husband. Mr. Collins explains it with one line of dialogue from Quarry. “Let’s just say I owed you one.”

Owed him what? She cheated on him when he was in Vietnam. Without his knowledge, she was already twice widowed to soldiers. Betting they would die in combat, she married them to collect their death insurance. Quarry was to be the third. She wished him dead and cuckolded him. Yet Quarry saved her husband for her? This implausibility gives the impression of a patched story hole—as if the author realized what an awful mistake this plot point was and threw in a line at the end to close the hole rather than remove this glaring issue from the story. I remain mystified.

Pass on this one.