The Quantum Universe (And Why Anything That Can Happen Does) 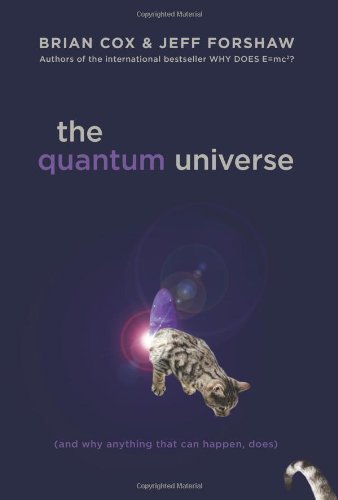 “Quantum theory is weird, yes, but it absolutely has to be the way it is in order to explain the weird behavior of the world we live in. . . . The Quantum Universe may not demystify quantum theory, but it does give the reader an idea of the size of the mountain the book is trying to climb—and a toehold or two to help get us started on our own ascent.”

Quantum theory has a bad rap. It is a by-word for strangeness. It is arguably the main reason why so few people understand or trust science anymore. So a book that promises “to demystify quantum theory” is offering something quite special.

Its authors, Professors Brian Cox and Jeff Forshaw, both physicists at Manchester University in the U.K., have good credentials when it comes to demystification. Their previous book Why Does E=mc2? [reviewed by New York Journal of Books] did an excellent job of living up to its ambitions and gave us deep insights into how Special Relativity works.

The Quantum Universe takes essentially the same approach as this earlier work. It presents some of the inexplicable findings that were plaguing scientists at the end of the 19th century—such as the discovery of unique patterns of colored light emitted by different materials—and shows how theoreticians in the early part of the 20th century came up with a radical new explanation for them, first expressed by Heisenberg in 1925.

Professors Cox and Forshaw do not dwell on the history of the subject, merely mentioning the contributions of Schroedinger, Bohr, Dirac, Einstein, and the others, instead quickly giving the reader a chance to do some real exploration of the theory by guiding us through the derivation of Heisenberg’s famous Uncertainty Principle.

To avoid difficult mathematics (like manipulating complex numbers) they introduce us to Feynman’s use of little clock diagrams to represent quantum states. It works well at first, but later in the book the feeling that the clock diagrams are doing a bit too much work begins to grow—we are soon talking about clusters of clocks and, eventually, clocks which represent sets of clocks. By the end of the book, the reader might be feeling that it would have been better to have taken the plunge and learned the math.

After the triumph of deriving the Heisenberg’s Uncertainty Principle (one of the most misunderstood and over-interpreted ideas ever) the book moves to more practical matters, like describing the workings of a transistor. The authors are quite right in saying that the transistor has been a world-changing invention, and its operation can only be understood in quantum terms, yet the amount of space devoted to explaining it seems disproportionate to its inherent interest. Worse still, to introduce the many ideas needed to follow the explanation, the text becomes quite stodgy and didactic. The authors even make self-conscious apologies for their classroom tone.

Finally, with the help of another graphical tool, the Feynman diagram, The Quantum Universe (And Why Anything That Can Happen Does) moves into broader areas of how particles interact. It also talks about how particles might get their mass, what anti-matter is, the measurement problem, and similar fun topics, and ends on a whole chapter calculating the Chandrasekhar mass (the upper limit on the mass of a white dwarf star) from first principles.

Sadly, it turns out that quantum theory really is weird. Don’t think that reading The Quantum Universe by Professors Cox and Forshaw will make any of that weirdness go away. In fact, the more you learn about it, the more weird it is going to seem.

The state of an electron depends on the state of every other electron in the universe. Inexplicable constants abound. Rules like Pauli’s Exclusion Principle explain the data but cannot themselves be explained. Particles (which are also waves) are point-like, having no physical extent. And so on.

As Richard Feynman famously wrote, “I think I can safely say that nobody understands quantum mechanics.”

But understanding the quantum world in the deep and satisfying way that we’d like to is not at all necessary to describe its workings with exquisite precision. It is this astonishingly accurate mathematical description of the consequences of a set of rules that, as strange as they may seem, actually work, that is the focus of Professors Cox and Forshaw’s brief excursion through the looking glass.

It is an approach they jokingly describe as the “shut up and calculate” school of physics, but it emphasizes one of the important underlying messages of the text.

Quantum theory is weird, yes, but it absolutely has to be the way it is in order to explain the weird behavior of the world we live in. A theory that did not explain wave-particle duality as revealed in the famous “double slit” experiment, would be worthless. Quantum theory does the job and much, much more. And if it paints a picture of the universe that boggles our minds, the best we can do is take it seriously and accept the limits of our imagination.

The Quantum Universe may not demystify quantum theory, but it does give the reader an idea of the size of the mountain the book is trying to climb—and a toe-hold or two to help get us started on our own ascent.