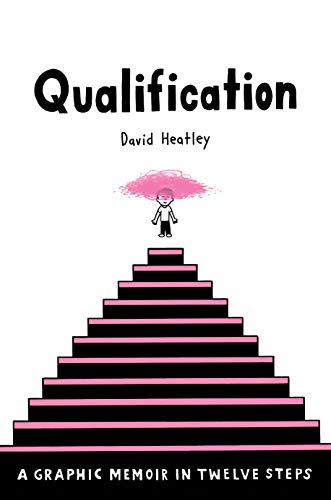 Reading Qualification feels a little like stepping into a softer-lit version of the 1999 film adaptation of Fight Club. In Fight Club, the narrator fakes debilitating and fatal illnesses in order to find solace in support groups. In Qualification, protagonist David finds himself addicted to 12-step groups: Codependents Anonymous, Debtors Anonymous, Underearners Anonymous, Al-Anon, Sex and Love Addicts Anonymous, Overeaters Anonymous, Alcoholics Anonymous. He goes to multiple meetings a week, sometimes multiples per day, yet his goal is not actually to beat an addiction: the meetings themselves are the addiction.

While its scenario lacks Fight Club’s nihilism, Qualification is in many ways a darker, more nuanced look at the struggles of masculinity and the failures of the family. Heatley presents a man less troubled than his family members, but still struggling to fulfill his needs and manage his raging desires. Neither his childhood family nor the family he makes allows him to feel complete, so he becomes certain that the problem must lie within himself.

David’s history is haunting. Incidents of childhood abuse, complex overlapping sibling sexualities, odd moments of attraction and repulsion from his father, and his mother’s selfishness all contribute to David’s inarticulate shame and unfocused desire. The family shivers, and the parents join their first 12-step groups (two each). The mother thrives, leaving the family; the father collapses under the weight of expectations.

David’s marriage and family pile their own expectations onto him, and he’s left with a fundamental artist’s paradox: doing what he loves doesn’t pay the bills. His plea to his wife, “Why can’t you just support what I’m doing now?” has a simple, heartbreaking answer: “Because it doesn’t pay enough!” David folds into himself, filled with rage and resentment toward his wife and new baby: “Here was that same stubborn unwillingness . . . rearing its ugly head again. It made no sense. I loved these two people more than anyone else in my life. And yet, I wouldn’t—or couldn’t—go get a job.”

He’s drawn to Debtors Anonymous, and finds a meeting for artists and writers, which fulfills a crucial need in him: “It was a rush to be seen and heard by talented artists and writers.  All that undivided attention. It made me high.”

The attention becomes crucial to him. Through the story, David enters more and more 12-step groups, sometimes for problems he creates as he goes. He doesn’t “work the program,” seldom progressing past the second step. Instead, his goal is to be as active in meetings as he can: “I had become an expert at getting chosen to share. It was incredibly validating.” His goal is qualification, the opportunity to share his entire story with the group, standing before them all and commanding their full attention.

While Heatley doesn’t directly articulate why this attention is so addictive, he builds David’s need for unconditional adoration into the character. His men’s group for sexual addiction offers him the father figures he longs for: “These men knew how much I wanted to be perfect, how exhausted I was, how to talk me down when I got into overdrive.” Yet he never finds a sponsor, and the relationships he forms in these groups are inevitably fleeting.

The problem, finally, is that the programs are intimate, but anonymous. Members appear and disappear. The most stable members wind up serving the least stable, and their emotional resources become exhausted. David has profound needs, but they can’t be fulfilled only by the swirl of human suffering and his own self-management.

Within this graphic novel, there’s a strong and subtle critique of American culture and its emphasis on individualism. The absence of triumph becomes a profound personal failure, a sign of something fundamentally lacking. “Addiction” may be real, but David reads it as a synonym for failure to thrive, for all human needs that run out of control. It’s a complex idea, thoughtfully rendered, carried through a harrowing, often funny, engaging personal story.