The QB: The Making of Modern Quarterbacks 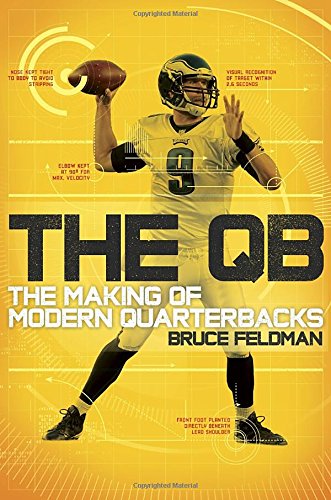 “Bruce Feldman has written a masterpiece of a sports book, and any true fan will find fascination and delight on every page.”

Bruce Feldman has written the most engaging, fascinating sports book in years.

The QB: The Making of Modern Quarterbacks focuses on the difficulty of turning strong young men into leaders possessed of the intangibles to rally their locker rooms, be the face of their franchises, and perform one of the most difficult roles in sports.

Feldman takes readers inside the world of elite quarterback training programs, ranging from the ESPN-sponsored Elite 11 program, led by Super Bowl-winning quarterback Trent Dilfer, as well as some of the individual quarterback gurus who now stalk the landscape.

The trouble with sports books is that they can capture the nature or the character of individual competitors or take us inside the angst that coaches and athletes experience behind the scenes.

But there’s still a limit that such books bump up against. You leave the book having enjoyed the experience, and perhaps possessed of a deeper bond with the individuals portrayed, but you know little or nothing more about the sport than when you started.

What sets Feldman’s book apart is his demonstration of not just what the athletes do and say, but of the specific training guidance they receive. As a result, the reader comes away with a much deeper and nuanced understanding of how quarterbacks think and what they really do.

Consider this advice from Green Bay Packers quarterback, Aaron Rodgers, to David Blough, a high school quarterback, who realizes he has a “once in a lifetime opportunity to pick the NFL star’s brain.”

“I feel I did something wrong there,” Blough said to Rodgers.

“Yeah, you’re over-striding on your back step, and you didn’t get your full rotation through,” Rodgers told him.

“Well, what do you think I need to work on the most?”

“You’re staring down your target,” Rodgers replied. “You’re throwing one-on-ones, so, of course, you’re gonna stare down your receiver, but challenge yourself. You’ve got all the arm talent in the world. You know you’re throwing to this guy, but why not stare down the middle of the field and know what timing he’s going to be on, and then, on your last step, look over at him and deliver the ball. Find a way to challenge yourself even if it’s a little routine drill or roots-on-air (against no defenders).”

If that kind of conversation doesn’t get your heart started, you’re really not a serious football fan.

Feldman also excels at creating portraits of some of the top quarterback trainers and their approaches. His number one subject is Dilfer, a tightly wound leader of men, who appears to be in search of redemption for failing to maximize on his own talents during his NFL career.

Feldman writes that Dilfer’s approach to training quarterbacks changed dramatically as a result of the death of his young son. The high school quarterbacks Dilfer teaches become like surrogate sons to him. This is the kind of poignancy you don’t see every day in a sports book, or in any book, for that matter.

Feldman also categorizes the training methods, competitiveness, and occasional snarkiness of other quarterback gurus, not all of whom like or respect each other. You get to see the behind the scenes sniping—who believes the other guy’s in it just for the money or the glory? That kind of thing is always fun.

The other major subject of the book, although you wouldn’t necessarily know it from the title or subtitle, is Johnny Manziel. Feldman loves Manziel and looks beyond the celebrity lifestyle and occasionally abrasive personality to recognize what he clearly considers is one of the greatest talents in this history of the position of quarterback.

It’s hard not to overcome any prejudice one might hold regarding Johnny Football, after reading this book. One comes away with a sense that Manziel never had the faith of NFL decision makers, because of his size and twitter feed, but if he ever gets to put down the clipboard he’s carrying on the sidelines at Cleveland this season, he could be one of the all-time greats.

While the jury may be out on Johnny Football, the verdict is definitely in on the QB. Bruce Feldman has written a masterpiece of a sports book, and any true fan will find fascination and delight on every page.