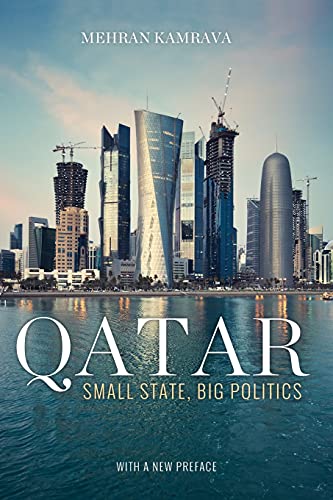 “adds little, if anything, to the lexicon of literature covering the Persian Gulf region.”

Mehran Kamrava recently offered an updated release of his 2013 hardcover on Qatar. This 2015 edition includes a short preface intended to cover the changes wrought by the Qatari Emir’s unexpected retirement in favor of his son, an event that occurred just as the original book reached the printing press. Unfortunately, neither the update nor the original text rise to expectations. Both fall short in terms of information and academic balance.

In Qatar: Big State, Big Politics, Kamrava attempts to identify the forces that have enabled the young state to climb from a remote fishing village of the early 20th century to a major player in both the global economy and Middle East politics.

While acknowledging the obvious benefit of combining massive hydrocarbon wealth with a tiny populace, he argues that the Qatari citizens owe much of their nation’s rise to the shrewd leadership and “hyper-diplomacy” of the ruling Al Thani family. In doing so, he characterizes the Al Thanis’ particular method of power application as “subtle power,” attempting to add this new form of power as a fourth angle to Joseph Nye’s long-accepted triangle of hard power, soft power, and smart power in international relations.

Kamrava writes well, and is not over prone to the wordy passive style that permeates most academic literature. He has, at times, a sardonic wit, and usually provides a great deal of support for his arguments. Thus, an uninformed reader might even consider his text illuminating.

Certainly he covers the basics of Qatar’s rise. He details the shift eastward of the region’s center of gravity, and the inability of larger states to grasp globalization. He covers Qatar’s “enemy of no one” policy of “hedging,” depending on the umbrella of the United States military for defense while maintaining warm relationships with Iran and non-state fundamentalist groups. He covers Qatar’s financial triumphs and savvy investing in exhaustive detail. Still, informed readers will note the absence of significant attention to the darker side of Qatar’s ascendency. They will also see a tendency to forgive Qatar all its ills, leaving the overall work to feel out of balance. Finally, Kamrava’s failed attempt to use the book to coin a new term in international relations theory comes off as out of place.

In a text that is supposed to cover the nation of Qatar and its rise, Kamrava all but ignores one of the most important pillars of its success: the kafala (sponsorship), system, in which immigrant workers are brought to the country by “sponsors” and not permitted to leave without their consent. Of the 2.2 million people in Qatar, 1.4 million are immigrant workers, an astounding number never mentioned by Kamrava.

Kafala creates an environment for near-slave labor that is heavily abused and well known in Qatar, and has significantly aided Doha’s rapid rise in infrastructure. Kamrava makes only passing mention of immigrant labor in his original text, and only grudgingly acknowledges the existence of kafala in the preface update because of a scandal related to Qatar’s Word Cup 2022 construction projects. Covering the rise of “high modernism” in Qatar without mentioning the huge bonded labor force that made it possible, or the systemic human rights violations that result shows a wanton lack of balance.

Other issues of balance arise in Kamrava’s treatment of Qatar’s Machiavellian foreign policy. He admires the Al Thani’s overtures to Iran and to fundamentalist organizations as shrewd diplomacy, treating the reluctance of other Gulf States to do so as a lack of political intellect without ever considering that their actions may be informed or moral choices.

He talks around Qatar’s funding of terrorist organizations in the original text and downplays the same in his preface update, lashing out at critics of his favored state in a fit of sarcasm that borrows heavily from an article by Glen Greenwood, the journalist who became the NSA traitor Edward Snowden’s primary accomplice. Along these lines, serious students of Middle Eastern politics will also find Kamrava’s fawning support of the Qatari effort to brand themselves as an “honest broker” worth a smile.

Outside of the imbalance of its information, Qatar becomes frustrating when Kamrava shifts into his attempt to coin the term “subtle power.” He spends chapter two in a broad discussion of small states and their potential for regional and global impact. During this chapter he goes into great detail covering Joseph Nye’s theories of hard power, soft power, and smart power in international relations. As a quick summary: hard power is the application of military or economic might, soft power is the use of diplomacy and culture to get others to want what you want, and smart power is the intelligent application of both.

After explaining Nye’s theories, Kamrava goes into a lengthy explanation of how small states may employ “subtle power” as a completely new form. He seems oblivious to the fact that the terms and examples he provides are merely specific forms of hard and soft power, and that the combination of them is simply another example of Nye’s smart power.

Finally, while filled with data, Kamrava’s assessment of Qatar’s capacity and modernism is, again, fawning. Encountering previews of the data throughout the text and entering the main thrust of it in chapter five of six, readers are likely to feel like they are reading a stock prospectus rather than an academic work. Then they will become absolutely sure of it when Kamrava actually includes a lengthy quote from the promotional materials of a Qatari real estate project, as well as a second and equally lengthy plug from the project’s developer. The same project happens to be at the center of the recent kafala human rights controversy mentioned earlier, a point not covered in the preface update.

Qatar: Small State, Big Politics, adds little, if anything, to the lexicon of literature covering the Persian Gulf region. It reads as a puff piece for the Al Thani family, with an out-of-place chapter devoted to a poor attempt to coin a new term in international relations power theory. The “updated” preface is too concerned with defending Qatar’s most recent offenses to provide any useful analysis. In short, there are other, more up-to-date, more balanced works available on Qatar. This one is best left on the bookshelf.