Putting Away Childish Things: A Tale of Modern Faith 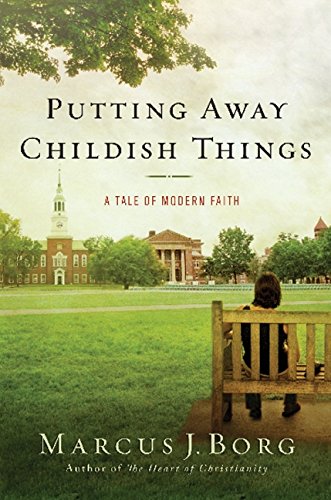 Those who follow the world of religion are aware of the Episcopalian “Protestant yet Catholic” dichotomy and the growing rift between its liberal and conservative parishioners. The most recent quake widening this chasm is that of Bishop-elect Mary Glasspool of the Diocese of Los Angeles. In 2009, the Archbishop of Canterbury, Rowan Williams, called for the rejection of Glasspool’s appointment because she is a lesbian. As of this writing, it looks like Glasspool will be the second openly gay Bishop of the church. With this in mind, the opportunity to read Marcus J. Borg’s first novel was welcomed. This is the story of Dr. Kate Riley, professor of religious studies at a small liberal arts college in Wisconsin, and her search to connect her two passions, faith and teaching. Her story includes the politics of receiving tenure versus the honor of an invitation to become a visiting professor at a highly recognized seminary as well as the social politics of religion are the basis of this story. Should Kate move on for the offering of prestige at a liberal seminary, more money, and the opportunity to be closer to a former lover? On the other hand, should she stay to avoid the possibility of losing tenure that is in reach within one year and knowing the new post is only guaranteed for one year? I enjoyed Borg’s to referring his characters by first name. In his preface, Borg, a highly respected biblical scholar, tells his readers that this book is “a teaching novel.” It is an introduction and explanation of liberal Episcopalian beliefs as told through Erin Mattson, one of Kate’s students. Erin is a devout Christian who belongs to a conservative Christian group, “The Way.” However, with a brother who is gay, religious politics create the rift between Erin’s beliefs and reality. It reflexes the rift between conservative and liberal Episcopalians. Is Erin’s brother the good person that she knows, or is he condemned to Hell for his sexual orientation? Not an easy question for Erin or for the church. This is an informative read, providing insight to the world of liberal thought in an otherwise conservative church. The reader knows where each of the characters belongs on the chessboard. Even the support players are easily identified and their moves known, a female rector, an openly gay friend, and Kate’s former professor/lover who teaches at the seminary. The first two act as Kate’s conscience, the latter the connection between the two institutions. Erin’s “awakening” comes from her own confusion of “the truth.” She is enrolled in Kate’s course, “Religion and the Enlightenment,” and Kate becomes Erin’s guiding light. The conversations between Erin and Kate provide the lesson plan for the author, the ability to ask the question and provide an answer for the reader. And these are not easy questions to address. Is the Bible absolute or is it a collection of oral history and are the meanings of the stories the goal of the Book? How does one reconcile the “pre-Easter” and “post-Easter” stories of Christ? Are gays, lesbians, bisexuals and transsexuals condemned because of their orientation, or should they to be fully accepted into the community because we are all children of God? It is unfortunate that Borg concentrates more on tenure and decision making than Erin’s story of the search for “truth.” Her story is the lesson that the Episcopalian Church needs to reorient itself to liberal thought, to be accepting and inclusive. Kate’s story seems to be the post holding the signs of direction and not the directions themselves. The other problem appears to be the overuse of commercial names and what seems to be a more English orientation than American.  Kate drinks Guinness stout and not a Wisconsin pilsner. Her friend drinks Glenlivet scotch and not an American whiskey. The names of the characters seem more U.K. than U.S. Kate’s preferred non-alcoholic beverage is tea with milk and sugar, very British, and not coffee, very American. I also felt slapped in the face with religion in the first chapter and repeatedly throughout the book. Prayers and biblical references concerning Kate’s beliefs are meant to show how a devout Episcopalian can have liberal beliefs. However, for this reviewer it is overdone. This is a well-told story and Dr. Borg’s goal of providing a learning platform in the guise of a novel was indeed accomplished. This is a book which should be read by Episcopalians, Catholics and other Christian sects, for no other reason than to help understand the disconnect between liberal and conservative Christian thought.    Reviewer David Rosman is a award-winning editor, writer, professional speaker, and college instructor in Communications, Ethics, Business, and Politics.