Putin's Russia: The Rise of a Dictator 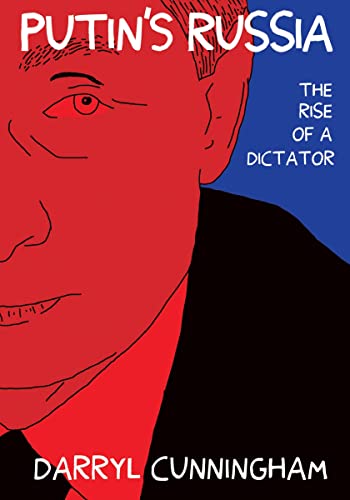 “A frightening indictment of the Russian president, this book traces the long road leading up to today’s headlines.”

With eerie timing, Putin’s Russia: The Rise of a Dictator, appears just as Russian troops are attacking Ukraine, threatening the stability of Europe and the rest of the world. British author and cartoonist Darryl Cunningham’s devastating graphic biography provides a succinct and telling account of former schoolyard thug Vladimir Putin’s career.

Putin (b. 1952) grew up in Leningrad and yearned to join the KGB. He began working at the Soviet security agency in 1975, serving as a liaison officer with East Germany’s Stasi, tasked with recruiting scientists and businessmen to smuggle Western technology into the Eastern bloc.

In the post-Soviet turmoil of the 1990s, he rose mysteriously (“without effort”) through the ranks of power, perhaps with the help of former KGB masters, eventually heading the FSB (successor to the KGB).

With the support of powerful associates, Putin became president in 2000. Already an unknowable figure, he quickly consolidated his power. Within months of taking office, he controlled all three federal television networks.

In ensuing years, Western leaders “missed Putin’s transformation from a bureaucrat who had been entrusted with a huge country into a megalomaniacal dictator,” writes the author.

Before long, Putin had annexed Crimea, eliminated democratic reforms, and encouraged a cult of personality built on appeals to nationalism and masculinity, all the while enriching himself with some $200 billion in “ill-gotten gains.”

“Any attempt to calculate his net worth won’t succeed,” says an exiled Russian banker, Sergei Pugachev. “He’s the richest person in the world. There are approximately 10,000 officials in Russia working for Putin who are given instructions to kill, torture, kidnap, extort money from people, and seize their property.”

He adds, “There is not a single penny registered in his name. It’s registered in other people’s names.” They include Putin’s childhood friend Peter Kolbin, a former butcher.

Readers will be taken aback by the author’s chronicling of Putin’s many amoral and corrupt acts of the past two decades, including the murders or “suspicious deaths” of dozens of Russian journalists. One reporter, Anna Politkovskaya, a critic of Putin, was shot dead in the elevator of her Moscow apartment building. “Putin had turned 54 that day,” writes Cunningham. “Many people believed that this murder was a birthday present.”

In a widely covered 2006 incident, Alexander Litvinenko, a former FSB officer granted asylum in Britain, where he was working for MI6 as an expert on Russian organized crime, was poisoned with polonium-210, a radioactive isotope, placed in his tea.

Before dying in London, Litvinenko dictated a statement that was later released: “You may be able to shut one man up, but the noise of protest all over the world will reverberate in your ears, Mr. Putin, to the end of your life. May God forgive you for what you have done, not only to me but to my beloved Russia and her people.”

In essence, Cunningham’s damning, brightly illustrated book is a sharp and much-needed reminder of the many controversies and unlawful shenanigans of Putin, from human rights crimes and assassinations to disinformation campaigns and attacks on Western countries.

He concludes with words from the well-known Putin critic Garry Kasparov, a Russian chess champion. “The world needs to stop pretending that Putin’s regime is a normal state,” he says. Putin “should not be considered an internationally respected leader but a murderous KGB mafia boss with an assassination squad and a chemical weapons lab.”

A frightening indictment of the Russian president, this book traces the long road leading up to today’s headlines.