The Pursuit of Mary Bennet: A Pride and Prejudice Novel 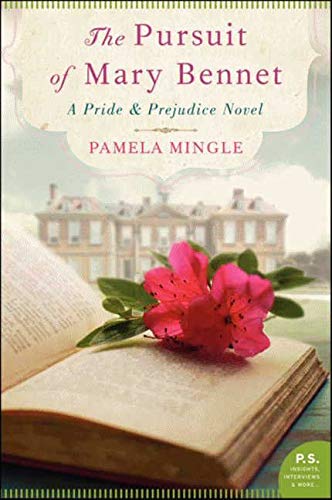 “. . . a fascinating story [that keeps] the reader engaged.”

Many readers who enjoyed Pride and Prejudice may have developed an affection for the Bennet Family, wondering what happened to them after the conclusion of this engaging story. Pamela Mingle deftly takes up where Jane Austen left off in The Pursuit of Mary Bennet.

Ms. Mingle is careful to reacquaint readers to the Bennets by introducing daughter Mary who is eavesdropping on a discussion which brings all of us up to date on family happenings. It is a seamless transition where we find the Bennet sisters matured and their parents fretting over their own futures.

Pride and Prejudice was published in 1813. Author Jane Austen illustrates how cracks in the wall of the existing order appear. Her work demonstrates a shift in power and economics where respectable tradesmen were entering a sphere occupied exclusively by feudal land barons.

Women began to question their preordained role as submissive, non-assertive and dependent family members. Elizabeth’s suitor, Mr. Darcy, admired her “independence of mind” and her “laughter, ease and liveliness.” A flurry of pre-feminist writing emerged during that period.

In The Pursuit of Mary Bennet, Ms. Mingle continues to exemplify these changes—in leaps forward and steps back. As the story opens, sister Mary holds in her anger (wishing only in her mind to be able to chew thorns) when she endures jibes (“plain,” “awkward,” “spinster for life”) from her mother and sisters. She dare not react, risking a breach in decorum.

Sister Lydia, in contrast, bursts in on this tranquil family milieu—very pregnant--with news of her separation from husband, Mr. Wickham. In a frantic attempt to maintain a veneer of stability, Mary and Kitty are dispatched to sister Jane’s estate during Lydia’s confinement. It is here that both of them meet Henry Walsh and vie for his attention in different ways.

Ms. Mingle keeps the tension taut through the interplay of three themes, which keep us reading and impatient to know the outcome.

She continues the Austen theme of changing times by weaving in examples of proper and indecorous behavior. We learn, for example, that there is more to Lydia’s story. Mr. Bennet reacts to all of these with a predictable retreat into his library; Mrs. Bennet—unsurprisingly takes to her couch in a swoon.

The second is the political practicality of marrying off daughters. The senior Bennet’s marriage is one of practicality gone bad in the economic sense. The status of their five daughters is critical not only to their own status, but to Mr. and Mrs. Bennet’s future.

The third is the ambivalence of daughters as they see their respective fates unfolding before them. Kitty fights for Mr. Walsh’s attention, yet eyes another suitor. Lydia’s bonding with her child is difficult. Mary rises to the occasion of mothering in the interim and realizes much about her own humanness—a sentiment both elating and frightening. Mary’s relationship to Mr. Walsh is one of approach and avoidance to an almost maddening degree.

Unlike Jane Austen’s technique of dense and cerebral narrative, Ms. Mingle tends to bog down in spots by a dialogue-driven method of advancing the plot. At these points, her narrative depth thins out.

She develops Lydia’s and Mary’s characters in an exaggerated way. It is hard to picture even the most frivolous woman of the time having such an attitude as Lydia’s when she questions why she should not “have fun” (i.e. also sleep around,) because of her husband’s dalliances.

Poor Mary trundles through life sitting on the sidelines at dances and singing off key at the pianoforte. Her approach/ avoidance toward Mr. Walsh keeps the reader wondering whether she has played her last card in the game of love. Pride and Prejudice readers may find parallels to sister Elizabeth’s reaction to Mr. Darcy.

The timing of Pursuit is strategic in that the world remains enchanted by the gentility and refinement of a bygone era when footmen and lady’s maids ministered to a family’s every need. Television viewers reportedly devoured the first three seasons of Downton Abbey, which afforded an insider’s perspective on the waning life of the landed gentry.

Ms. Mingle is courageous to follow in the literary shadow of a master. She does hold her own in telling a fascinating story and keeping the reader engaged. Pursuit is a well executed novel, but perhaps not a classic in the Jane Austen sense.