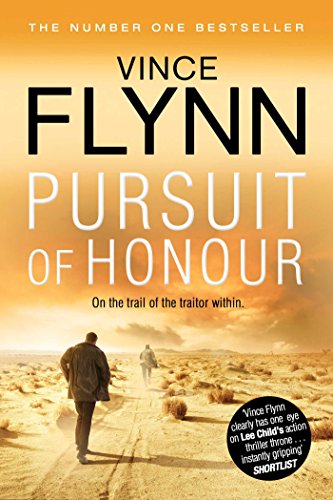 Atria Books, October 2009 Pursuit of Honor is an ideal title for this CIA political thriller. Against the backdrop of an intriguing story, Flynn brings together the psyches of a diverse group of heroes, villains, and those in-between—all who are seeking honor as they perceive it. Mitch Rapp, the protagonist, is one of those who are somewhere in-between hero and villain. “I’m damaged goods,” he says, recognizing this in himself. He is a Non-Official operative of the CIA, a black ops agent who has spent years working outside the law, doing America’s dirty work. Now his methods are being increasingly constrained, increasingly called into question by the very people he is trying to protect. As the CIA Inspector General turns traitor and Rapp’s team moves in to clean up the mess, even one of his own agents, his good friend Mike Nash, begins to question the ultimate morality of what they are doing. Meanwhile, a three-man Islamic terror cell is at large in the United States. They have perpetrated a horrifying attack against a Washington, D.C., restaurant frequented by politicians and their families, killing almost 200. A secondary attack against the National Counterterrorism Center would have doubled the death toll, but it was foiled by the daring efforts of Rapp and Nash (the subject of his previous book). As the terrorists lay low in a safe house and wait for the investigation to blow over, one of them begins to question the honor of their actions. Pursuit of Honor follows Rapp and Nash in their efforts to locate the terrorists and deal with the traitor within the Agency. Flynn focuses on the political pressures that Rapp and Nash must work beneath, as well as the tension between the two of them as they disagree over the most honorable methods to accomplish their goals. He balances these against the tension within the terrorist cell, as they struggle with their own definitions of honor. Those looking for a black ops thriller with high-tech gadgets and fast-paced action should look elsewhere. While there are a few action scenes and a smattering of political intrigue, Pursuit of Honor is mainly an exploratory juxtaposition of psyches. Throughout the story, Flynn moves from perspective to perspective, immersing the reader in the characters’ thoughts as each pursues the actions that he or she believes will bring them honor. He shows a deep understanding of the motivations of the human mind and weaves his insight seamlessly into the story. There are just a couple of detractors to this novel. The first is the remorseful terrorist, Hakim. His conversion is necessary so that the conflict within the terror cell can balance the conflict between Rapp and Nash; however, his change from a terrorist who willingly executes the bombing of a restaurant full of families, to a sympathetic character, railing against his commander for indiscriminate collateral damage, seems a bit abrupt. Hakim’s conversion may be the continuation of a storyline from a previous novel, but, taken in the context of the individual book, it is a bit disorienting. Additionally, this book contains a large volume of foul language. Most of Flynn’s dialogue is filled with expletives, at times to a gratuitous degree. Still, if you can accept Hakim’s abrupt turn around and bypass the pervasive blue language, Pursuit of Honor is worth reading.