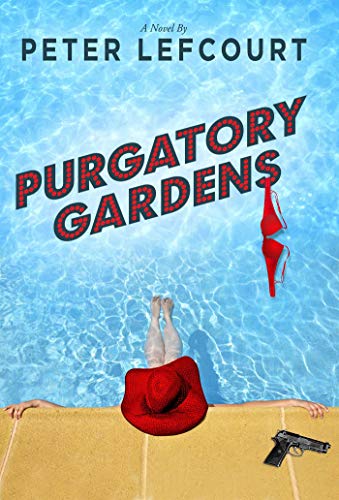 We’ve seen the premise before: two men fall for the same woman. The idea is as old as dirt, but Peter Lefcourt uses black humor, taut writing, and intriguing characters to give it a fresh look and a new spin.

Purgatory Gardens is a black romantic comedy that pits two men from diverse, yet equally corrupt backgrounds against one another as they fight for the attention (and bed) of the woman they have become enamored with. Simply put (and it is, by the publisher), Purgatory Gardens is “Elmore Leonard meets Carl Hiaasen”—and because it has silver screen written all over it, one can see it being directed by the Coen Brothers.

Let’s back up a moment. Before we have this optioned to Hollywood and packaged with A-list talent, Purgatory Gardens is a novel. Does it stand on its own merit as an intriguing story with characters we care about?

In a word, yes. And here’s why. In the first paragraph, sometimes in the first sentence, if the book is well-written we’ll know it. Purgatory Gardens passes this smell test as the reader is pulled right into the action and the lives of the characters with a deft opening. In fact, the first page pretty much lays out what’s to come.

This is no surprise if the reader is familiar with Peter Lefcourt. Lefcourt is an Emmy-award-winning writer who has been around a long time, penning novels and producing screenplays. Perhaps best known for The Deal, The Woody, The Manhattan Beach Project, and eh-hem, Desperate Housewives, with Purgatory Gardens Lefcourt shifts his focus to the cranky retirement communities of Palm Springs, California.

To tell his story, Lefcourt employs three primary characters: Sammy Dee (in his prior life, he was the mobster Salvatore Didziocomo); his rival, Didier Onyekachukwu (a deposed African finance minister); and the object of their attention, the aged-out-of-Hollywood character actress, Marcy Gray.

The setting, a retirement neighborhood with its attendant homeowners’ association and the shtick that goes along with it (CC&R violations, homeowner meetings, and the inevitable picayune peeves of people with too much time on their hands) provides for much humor, and Lefcourt does not miss an opportunity.

Purgatory Gardens is perhaps best described as a black romantic comedy. When done well, humor adds immeasurably to both a story and its characters, and Lefcourt had me chuckling throughout.

As noted in the opening, the novel’s concept revolves around two men (Sammy and Didier) who are vying for the same woman (Gray). On the surface, this is a tired storyline that could wither on the vine five pages on. But these men aren’t your usual senior-aged suitors and their tactics don’t involve your usual male grabs for the woman’s attention. Without giving anything away, the setup occurs fairly early on, it’s enhanced by a twist partway through, and then we’re off and running to see how it will unfold.

Purgatory Gardens is a light-hearted read that will both lift your spirits and make you hope that your own retirement will be nothing like the one portrayed. At the same time, it will motivate you to fill your golden years with the same kind of fun that this story inspires.