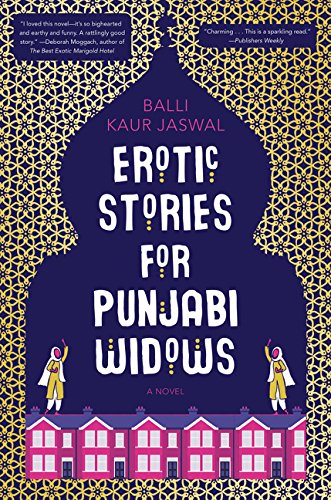 Nikki, the main character, is first generation British Sikh, and she is what they call a “modern girl.” She has disappointed her traditional parents by dropping out of law school, smoking cigarettes, wearing jeans, and working at a pub. She’s moved out of her parents’ house (which may bring shame to them) and has rejected the arranged marriage system as a useless and perhaps dangerous way of finding a mate (which may result in a breakdown of conventional Sikh values). She thinks sex is no big deal.

Nikki’s initial descriptions of the Sikh community will be familiar to all first generation immigrant children.

“Through the windows of the connecting bus to the temple, the sight of the more bilingual signs on the shop fronts gave Nikki a slight headache and the sensation of bring split into two parts: British, Indian. There has been family day trips here in her early childhood—a wedding at the temple, or a shopping trip dedicated to finding fresh curry spices. Nikki recalled the confused conversations of these trips as Mum and Dad seemed to both love and loathe being amongst their country folk: wouldn’t it be nice to have Punjabi neighbors? But what was the point of moving to England then? Now a bhangra bass beat throbbed from the car in the next lane. In a textile merchant’s window, a row of glittering sari-clad mannequins smiled demurely at passers-by. Vegetable markets spilled out onto the pavement and hot steam rose from a samosa vendor’s cart on the street corner. Nothing had changed.”

Jaswal has painted an engaging and vibrant picture of the British Sikh community, not only the traditional parents and grandparents, but also the more modern younger generation that struggles to find its place. Nikki herself has rejected much of Sikh culture, but she finds herself craving a simple daal roti at the oddest times. Her sister Mindi is also modern, but she decides to find a husband the old fashioned way, through an arranged marriage. Jason, Nikki’s boyfriend, feels all the pressures that come with being the first born son of a prominent Sikh family, but he is attracted to the simplicity of the gurdwara after his mother’s bout with cancer. They are all searching for their identities, that place where they fit in between British culture and Sikh tradition.

The widows in Nikki’s class are also struggling. They are not all old, some have been divorced or their husbands have died young. But they are denied the simple pleasures that come with deciding their own destinies. They wear the widow uniform of white clothes, paint grief stricken expressions on their faces, even bend down as they walk to give the air of much older and sicker people. Only in Nikki’s class can they be free to express themselves, and the stories they weave are their sexual fantasies come to life.

Nikki is under pressure by the temple to confirm to their wishes and stop the classes. When the widows’ stories start being shared outside of the classroom, there is fresh worry. Will the traditional, repressive and controlling aspects of the community accept these stories? There is drama, intrigue, even murder, as traditional values clash with modernity.