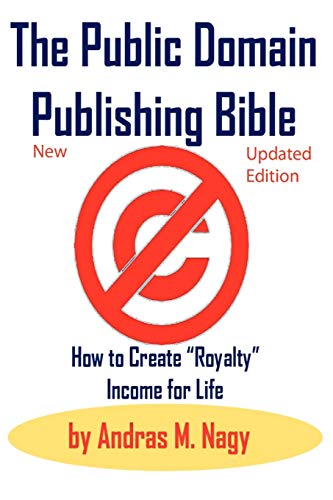 Ancient Wisdom Publications, September 2009
Andras M. Nagy is a self-proclaimed gambler. The enterprise described in his book The Public Domain Publishing Bible is not to be undertaken by the faint at heart.

Public domain titles contain initial publication dates before 1923. According to U.S. copyright law, anyone can republish these titles for profit. Nagy stresses that it is imperative to add original content to these works in terms of illustrations, footnotes, introductory material, covers, etc. Otherwise, you will be competing with numerous versions of these titles republished without modification. He states that sometimes Amazon.com will not even pick up your version if you merely republish the text as is.

The field is also littered with what Nagy calls “copyright bullies.” These individuals claim that they own the copyright to a public domain title. Their claim is invalid, but they will attempt to intimidate you by suggesting legal action. In the very least, their aim is to get you to cease publishing the work. Nagy urges you to stand your ground and demand proof of ownership. Personally, I don’t know if I would want to run into potential legal problems. Nagy recommends hiring the U. S. Copyright Office to investigate the copyright status of a title before publishing it. It is a financial drawback at $150 an hour.

To make money, Nagy uses print-on-demand (POD). If he has the only in-print version of a public domain title, he uses Ingram’s Lightning Source to take advantage of the wholesaler’s extensive distribution network. If he’s competing against other republished versions, Amazon’s CreateSpace has lower set-up fees. He recommends using free software applications such as Scribus, Open Office, and Gimp to cut start-up costs. Nagy also discusses book scanning for those not interested in typesetting. Optical character recognition (OPR) scans the entire physical book allowing text to be directly inputted into a word processing program. You can hire a book scanning service or invest in the equipment to create your own scans.

Nagy goes on to explain publicity tactics for promoting your public domain catalog. His main focus is on creating a web site that is search engine optimized (SEO). He explains off-the-page SEO techniques such as blogger reviews, directory submissions, and article and press-release distribution. On-the-page efforts entail an ALT tag for every image, keywords in page titles and anchor tags for inbound links.

At times, Nagy drifts away from his subject when he writes about creating a screenplay or the IndieBound movement. These sections would have been better off as appendices instead of breaking up the narrative.

1. Be selective in what you publish
2. Add creative modifications
3. Sell wholesale
4. If republishing titles as is, use CreateSpace
5. Do your own set-up and design
6. Use reasonable freelancers for what you can’t do
7. Take a long-term view
8. Learn to work with Amazon and Lightning Source
9. Work with independent bookstores
10. Write what you know. Stick to fields you like.

Overall, this is a comprehensive guide on how to republish public domain titles with a realm of useful resources and pertinent web sites.