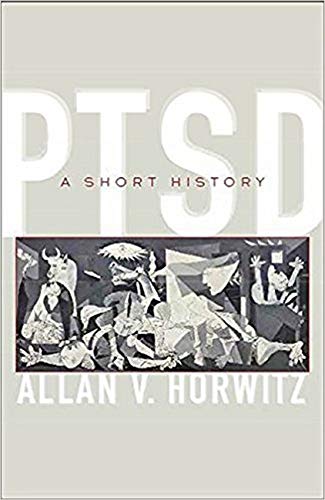 “In today’s trauma-focused society, PTSD: A Short History is a volume as brave as it is wise.”

Since its initial entry into the Diagnostic and Statistical Manual of Mental Disorders—the psychiatric profession’s bible for classification and billing—post-traumatic stress disorder (PTSD) has rapidly emerged as a widespread and largely unchallenged phenomena that has permeated both mental health treatment and the broader culture.

But what exactly is PTSD? Is it a discrete biological phenomenon? Or a socially constructed pandemic? And how has it become “the emblematic mental illness of the early twenty-first century”? In his sharp, objective and highly skeptical biography of the illness, PTSD: A Short History, Rutgers sociologist Allan V. Horwitz both places the current state of traumatic illness in a valuable historical context and challenges readers to rethink their fundamental understanding of the condition presently known as post-traumatic stress.

While psychological sequelae to trauma undoubtedly occurred throughout human history, Horwitz begins his biography during the 19th century, when soldiers responded to the brutal conditions of the American Civil War with a cluster of symptoms known as “soldier’s heart.” Many years after the carnage of Gettysburg and Shiloh, veterans wrote of “how the intense strain of battle persisted over time, causing intrusive recollections, startle reactions, and nightmares.” Horwitz notes that the Civil War was the earliest major military conflict “in which a high proportion of soldiers were literate,” allowing for “the first stirrings of psychological interpretations of wartime experiences.” Soldiers too traumatized to continue fighting were often branded as unmanly or cowards.

While lobbying by veterans organizations resulted in President Benjamin Harrison signing a pensions bill for disabled veterans in 1890, the staggering cost of such payouts—they accounted for 40% federal government’s entire budget by 1893—shaped “subsequent discussions of traumatic neuroses” by reminding the public of “the tremendous potential burden” that such compensation might impose.

In the period following the war, the expansion of American industry saw victims of train accidents pursuing tort claims against railroad companies and their insurers, claiming that they suffered from “railway spine.” Professionals actively debated whether these individuals deserved to be compensated.

One school of thought derided these claimants as malingerers whose illness was designed for the purposes of financial reward. One skeptic of the diagnosis wrote: “A man, whose spine is concussed on a railway, brings an action against the company, and does or does not get heavy damages. A man, who falls from an apple-tree and concussed his spine, has—worse luck for him—no railway to bring action against.”

In contrast, British surgeon John Erichsen argued in his highly influential On Railway and Other Injuries of the Nervous System (1866) that “railway spine” was a genuine organic illness, producing “emotional symptoms” as a result of traumatic spinal compression.

Yet over time, a third school of thought—what could be labeled as psychiatric, as opposed to legal or neurologic—gained influence. To physicians Jean-Martin Charcot, Pierre Janet, and, most notably, Sigmund Freud, traumatic reactions were conditions of the mind. Freud, of course, focused on childhood sexual trauma. He initially believed such instances pervasive, but later reinterpreted them as fantasies through which patients suppressed and reinterpreted their own shameful childhood experiences.

One of the crucial questions that these physicians confronted was whether individuals who manifested post-traumatic symptoms were constitutionally predisposed to such illness. The vast number of soldiers who suffered “shell shock” during World War I and “combat neurosis” during World War I called into question the dominant medical belief that only those with preexisting character pathology were likely to suffer these conditions long-term. In other words, healthy individuals were expected to recover quickly. For those soldiers who did not, combat was merely the trigger for prolonged illness rather than the cause.

This approach did not change significantly until the 1970s, when Vietnam veterans successfully persuaded Nancy Andreasen and the Reactive Disorders Task Force of the DSM-III to define the trauma in PTSD as the “existence of a recognizable stressor that would evoke significant symptoms of distress in almost everyone.” The pendulum had shifted from internal predisposition entirely to external factors.

Today, it is worth noting, a consensus exists that PTSD reflects both biological susceptibility and outside forces, with different individuals at risk with different levels of trauma. As Marilyn Bowman and Rachel Yehuda observe, “PTSD is best understood as a periodic expression of long-standing dispositions that often are risk factors for both threatening exposures and subsequent dysfunctions.”

Horwitz notes that we traditionally investigate PTSD in terms of the presence of trauma, rather than its absence. Yet if the condition is so widespread, it might prove more fruitful to inquire why some people do not develop post-traumatic symptoms. Psychiatrists Roy Grinker and John Spiegel observe of combat veterans: “It would seem to be a more rational question to ask why the solider does not succumb to anxiety rather than why he does.” Later, Horwitz writes of Holocaust survivors: “The question to be explained was not which survivors became mentally ill but instead which few were able to successfully adapt to such extreme circumstances.”

As Horwitz provides this detailed and fascinating intellectual history, he increasingly emphasizes the constructed nature of the phenomenon he is describing.

For instance, he wonders why the symptoms of “shellshock” during World War I (“hysterical deafness, blindness, paralysis of limbs, and violent tremors) differ from the common “combat neurosis” symptoms of World War II (“restlessness, irritability or aggression, fatigue on arising, seep difficulties, and anxiety”), concluding that “[t]his curious phenomenon might indicate that soldiers, like psychiatric patients in general, produce the symptoms that medical personnel and their culture expect them to display.”

In discussing the inclusion of the PTSD diagnosis in the DSM-III, he notes that it was the only major diagnosis which had “no field trials, tests of reliability, or statistical analysis of data.” Rather, “the driving force behind the diagnosis was the political agitation of antiwar psychiatrists and veterans’ advocates who relied on the moral argument that failing to include a PTSD diagnosis in the new manual would be tantamount to blaming victims for their misfortunes.”

Page by page and episode by episode, Horwitz builds a case that the “conception of PTSD as a distinct memory-related syndrome resulting from exposure to trauma—rather than a generalized syndrome that is highly interrelated with other diagnostic conditions—stems more from the demands of professional norms than from congruence with any natural entity.”

The ultimate target of his analysis is contemporary trauma culture. By expanding the definitions of PTSD and including subjective elements, the authors of more recent versions of the DSM have diluted the definition of trauma. Horwitz writes, “Trauma had moved from the battlefield, disaster, or rape situation into the realm of everyday life.” He observes that “[s]tudies have identified PTSD in people who have had wisdom teeth removed, given birth in uncomplicated deliveries, heard sexual jokes at work, discovered their spouse to be having an extramarital affair, or even watched a bad movie or a TV program.”

Since neither medication or psychotherapy has proven as effective as hoped for PTSD patients, “survivors” have turned to non-allopathic remedies including “fishing, swimming with sharks, yoga, horseback riding, vision quests, and parrot husbandry. . . .” Horwitz spends a considerable portion of his history narrating the meteoric rise and fall of the now discredited Recovered Memory Movement (RMM) through which overzealous therapists supposedly “discovered” histories of sexual abuse in their vulnerable patients; these memories were actually false—no case has ever been corroborated and the phenomenon appears biologically implausible—but they tore apart families and sent innocent people to prison.

Implicitly, Horwitz appears to be linking that tragic folly to the current PTSD crisis. He quotes Paul McHugh, a leading critic of RMM: “In but a few years we will all look back and be dumbfounded by the gullibility of the public in the late twentieth century and by the power of psychiatric assertions to dissolve common sense.” One suspects Horwitz may believe the same of our current trauma-obsessed culture.

What concerns Horwitz is that the widespread application of the PTSD label might actually lead to negative outcomes. “Cultures can promote too much, as well as too little, remembrance of past trauma.” For instance, while that psychiatric literature indicates that “traumatic memories gradually lose their forcefulness,” 99% of veterans who received disability benefits for PTSD do not improve from year to year. Horwitz argues that “disability programs, which cut benefits when patients no longer report traumatic symptoms, can actively promote chronicity by punishing those who improve and rewarding those who maintain enduring conditions.” He adds that, “As psychiatrists traditionally recognized, systemic reinforcements encourage enduring states of post-traumatic disability.”

It is important to emphasize that Horwitz is not dismissive of trauma victims or their suffering; rather, he is concerned that the monolithic present-day approach to classifying and addressing trauma may do more harm than good. “An overemphasis on recollecting traumatic memories,” he writes, “can both deflect considerations of reintegration and prolong suffering that might otherwise gradually dissolve.”

Needless to say, these observations are controversial. But Horwitz also points out that—unlike in past eras—nobody is presently questioning many of the shibboleths surrounding the diagnosis. He provides a trenchant and unsettling, albeit often contrarian, exploration of how biological symptoms can be constructed into a cultural-bound syndrome, and how that syndrome can transform public discourse. In today’s trauma-focused society, PTSD: A Short History is a volume as brave as it is wise.