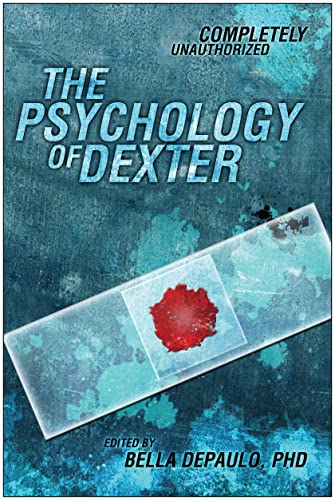 How does an author begin to critically analyze and explain a phenomenon in popular culture? The hit Showtime series, “Dexter,” has spawned a huge fan base as well as a growing following in books and “all things Dexter Morgan.”

For the few people who haven’t heard of Dexter Morgan yet, he is a fictional character who is a Blood Spatter Analyst for the Miami police Department by day and by twilight is a serial killer/vigilante extraordinaire.

He lives his life by a special code taught at the knees of his father, Police Detective Harry (now deceased), who realizes very early in Dexter’s childhood, that his adopted son (Dexter) has an overwhelming and seemingly uncontrollable urge toward violence and a lust for killing. The rules of “Harry’s Code” (as it’s referred to in the series) give Dexter permission to kill someone only if there is verifiable evidence that the person has murdered innocent victims.

Dexter’s charming and endearing nature, mixed with what appears to be a streak of shyness, is but the outer mask he wears for society at large. Underneath lurks an organized serial killer, referred to in the show as “The Dark Passenger.”

From the very first episode of “Dexter,” the audience bears witness to the private, personal thoughts and psyche of Dexter Morgan. This is brilliantly accomplished via his ever-looming voice that boldly narrates much of the story. Dexter’s voice describes, in full detail, the planning and motivation for each of his kills, the intimate chats he has prior to the very up-close and personal murder of each of his victims, as well as how he feels about his family and coworkers. Hearing every word of his inner dialogue brings the character of Dexter Morgan to life for both fans and psychological experts alike. Through this methodology, fans as well as readers of The Psychology of Dexter, gain great insight into his often feeble attempt to appear normal within the boundaries of societal rules and norms.

The Psychology of Dexter is a delicately woven compilation of contributing authors who are also experts in the fields of Criminology and Psychology. In each chapter, various authors and co-authors address a different Dexter-related topic from a slightly different angle. The mixture of their individual and collective viewpoints brilliantly accomplishes the huge task of mastering the analysis of Dexter’s psychopathology and pathos in a manner that is satisfying to both the most die-hard “Dexter” TV series fans as well as serious psychological and crime aficionados.

Myriad experts in the field of criminology and the like, who have written individual chapters in The Psychology of Dexter, paint a vivid picture through an in-depth examination into the mechanisms of the mind of a serial killer. For example, in the chapter entitled “The Psychology of Dexter’s Kills,” Maria Mauro, Psy.D., explains the character’s MO from the first episode of “Dexter,” entitled “Popping Cherry,” that lays the groundwork to the inception of one of Dexter’s most infamous signatures, otherwise known as Dexter’s “kill room.” It is in this room that he straps each victim naked onto a table and traps them in plastic wrap while he is dressed in his “kill suit” i.e. an apron and welding mask with a scalpel in hand. He then performs his signature act of making a small cut (while the victim is awake) on the cheek, carefully extracting a drop of blood, and placing it on a blood splatter slide as a souvenir of each kill.

Dr. Mauro points out that a clear-cut plan, methodology, and technique like this is common among real-life serial killers. These patterns of behavior are pieces of a puzzle that criminal profilers and experts in the field examine to assess the mind of each killer. Dr. Mauro explains in vivid detail the psychological reasons why Dexter saves the blood slide in order to “memorialize the murders and have physical access to the memory of the kill in the future like a prize that allows Dexter to relive the thrill of his kills.” These behaviors have been witnessed and analyzed by criminal experts in countless books that document their findings.

But what makes The Psychology of Dexter special is that the book gives the reader great insight from the minds of experts as they process their thoughts about the psyche of a thoroughly fascinating character that fans of the show feel they know. Each week fans wait with bated breath for the next episode of “Dexter” to catch a glimpse into “the life and kills” of America’s favorite serial killer.

As a reviewer, it was difficult to find even a minor flaw in this well-written and brilliantly edited book. There is one issue, however, that may be confusing to readers. Even though experts in the criminal/psychological arena often have minor disagreements about the origin and treatment of serial killers, the experts in The Psychology of Dexter also have those same disagreements, which could leave the reader a bit confused as to whose viewpoint is the correct one or if all of them are. This minor issue, however, certainly does not detract from the style, flow, or execution of this page-turner of a book.