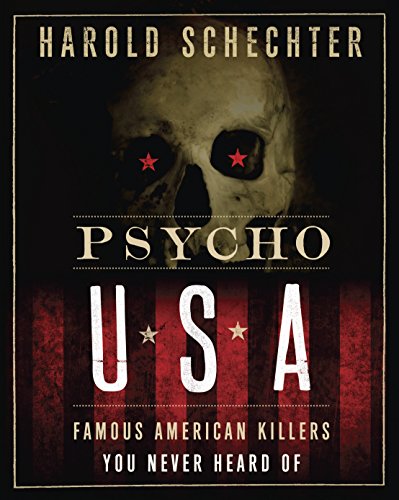 Almost everyone has heard the names of world renowned murderers such as Jack the Ripper, Ted Bundy, and David Berkowitz aka the“Son of Sam.” Many are familiar with their horrific crimes.

But few have heard of killers just as brutal: those considered the most evil in their day, whose names and crimes have evaporated over time.

In his skillful manner, Mr. Schechter relays what he calls “prime examples of the curious workings of infamy—the mysterious forces that bestow near-mythical status on some notorious killers while consigning others to near-total oblivion.”

He explores in great detail the mythology and hype surrounding notorious killers. His assumptions are proven accurate with the thorough explanations of the cultural trends surrounding each incident.

For example when sensational coverage of a crime in the 1920s was maligned, a Daily News publisher in defense of his paper stated, “Murder sells because we are all interested in murder.”

Psycho USA is a well-organized and researched chronicle of historically significant crimes and killers in the U.S. Each true story feels like a reenactment in which the reader goes inside the killer’s mind, his/her background, and motives—as well as those of the victims. Author Schechter is adept at building the details of each crime in both a succinct and yet gripping manner.

He brilliantly interweaves the history of killers and their crimes to the significant role they played in the development of our contemporary vernacular. Terms such as “serial killers” and “murderabelia” (collection of souvenirs and relics of crimes such as a portion of the hangman’s noose) did not always exist.

For example, in the 19th century what we now refer to as serial killers were known as “moral imbeciles” to describe those who used their intelligence to manipulate others and commit unfathomable horrors.

Each chapter is subdivided according to the era in which the crimes were committed. Each crime reflects the culture, morality, and customs during that particular era.

For example, one chapter is entitled “Post Civil War Monsters” (murders committed between 1866–1880). Others are delineated as “Demons of the Depression” or “Turn of the Century Psychos” of the time period 1892–1896. There are, of course, vivid examples of killers for almost every range of time in between.

According to the author, the various methodologies used to commit murder differed over time as well. There were a plethora of women who used arsenic to poison their victims in the 19th century. Some used the poison to rid themselves of abusive husbands; others who were financially strapped killed family members who were insured in order to rise above poverty.

At that time, arsenic was as easy to procure as aspirin is now. Used originally as a pesticide, it could be purchased by anyone from a grocer or a druggist by explaining it was being used to kill rats. These poisonings were so common this era was referred to as “The Age of Arsenic.”

Before the invention of “tabloid journalism” major murders were relayed to the public via “murder ballads:” poems and songs composed by those whose motives were simply to make a profit.

One such ditty was written about Lydia Sherman aka “The Poison Fiend” who in the 1870s killed eight people including two of her children, her first and second husband, as well as the children of husband #2. The first stanza of the ballad reads:

This is but a short sample of the hype surrounding infamous murderers du jour. There were seemingly no boundaries people used to capitalize on the public’s fascination with murder. The famed P. T. Barnum (founder of the Ringling Bros.’ Barnum & Bailey Circus), displayed a wax figure in his American Museum (conveniently located near the courtroom) of a killer named Polly Bodine. The display was widely advertised via flyers, resulting in hordes of visitors.

Well-respected authors also became part of the cultural fascination with murder through their various stories. For example, the classic story “The Tell-Tale Heart” by Edgar Allan Poe portrays the type of killer who tortures, kills, and dismembers his intended target.

Herman Melville wrote many stories about people he deemed the “unpardonable sinner” referring to bright men who lack a conscience and exploit the vulnerabilities of others. One of the most famous books, Psycho, penned by Robert Bloch, became the plot for Alfred Hitchcock’s classic movie of the same name debuting in 1960.

The killers described in Psycho USA are each unique in their professions, motives, and types of victim chosen. A few were even doctors during the day and killers at night, the ultimate Dr Jeckyl and Mr. Hyde types who wear a mask of respectable normalcy by day.

Robert Irwin aka, “The Mad Sculptor” whose only toy as a child was a bar of soap found that sparked his interest in sculpting. His mother bathed in his presence while espousing the importance of scripture.

Shockingly, in 1939 he was admitted to Bellevue Hospital’s emergency room for trying to amputate his own penis. Though consistently unstable, he studied with a master sculptor but never gained career success. He became infamous after a sculpted bar of soap was discovered at a horrendous scene of murder and mayhem. He became the most notorious killer in New York circa 1937.

Psycho USA is definitely a book crime aficionados will want among their collection of true crime books. Readers will be enthralled with the history and party atmosphere surrounding our nation’s killers. Considering fingerprint and DNA analysis had not yet been invented, it is quite stunning that almost all of the killers mentioned in Psycho USA were ultimately caught, tried, and executed.

The final chapter of the book contains a list of the author’s favorite quotes related to the criminal mind. Though some of the quotes are compelling, this may appear to some readers constituting an abrupt ending. One might expect a summary of sorts or a set of conclusions in this last chapter. The reader is left with a feeling of an incomplete finale in an otherwise compelling masterpiece.